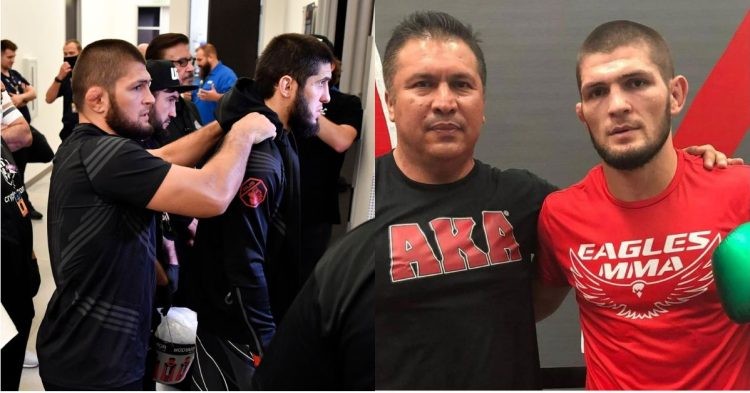 Islam Makhachev will have the opportunity to earn the lightweight title if he beats Charles Oliveira at UFC 280. Ahead of his title fight, Makhachev has been training hard under Coach Javier Mendez and former lightweight champ Khabib Nurmagomedov.

AKA head coach Mendez recently posted a short clip on his Instagram, in which Nurmagomedov was seen filming Makhachev as ‘the Eagle’ screams something in Russian. Coach Mendez wrote: “Sometimes even us Coach’s get a little fun out of training the fighters filming them.”

Mendez takes a cheeky dig at Khabib’s coaching style while saying: “He’s having too much fun.”

To which the former UFC champ replied: “It’s not fun coach, I wanna show him what he’s doing,” referring to showing the clip to Makhachev so that he knows how he is training. There is no tension at all between Nurmagomedov and Coach Mendez and it’s all fun and games. Mendez also coached Nurmagomedov in his UFC career.

However, since his retirement, Khabib has transformed into a full-time coach with a 3-1 record. ‘The Eagle’ cornered his cousin Abubakar Nurmagomedov during his UFC debut in Russia; however, Abubakar lost that fight via submission.

After that, he cornered his cousin Umar in his successful UFC debut and then again helped Abubakar pick up his first UFC win against Jared Gooden. He was most recently seen cornering cousin Usman Nurmagomedov for his Bellator debut against Mike Hamel, which resulted in a decision win.

Islam Makhachev is the betting favorite against Oliveira for the main event fight at UFC 280. With the event taking place in Abu Dhabi, the Russian will have home advantage as he is a hugely popular fighter there.

Other than that, Makhachev will have the former lightweight champion Khabib Nurmagomedov in his corner. He has been training under Nurmagomedov for this fight and it seems like he is taking this fight very seriously.

Oliveira is by far the toughest opponent in Makhachev’s career. The Brazilian is coming off impressive victories against Justin Gaethje, Dustin Poirier, and Michael Chandler in his most recent world title outings.

Having stripped off the belt ahead of his last title defense against Gaethje, ‘do Bronx’ will be very focused to reclaim the title. Both Oliveira and Makhachev have dangerous ground games. While the Russian has incredible wrestling, Oliveira has the most submission win in the UFC.

With Khabib in his corner, Makhachev will have another advantage and this could make a huge difference in this highly-anticipated bout. As it has been seen in his fight against Dan Hooker, Makhachev looked just as dominant as Nurmagomedov.

However, this time the Russian will face not only a dangerous striker but also a submission specialist in Charles Oliveira. This fight will be an absolute banger featuring two of the best lightweights in the promotion.