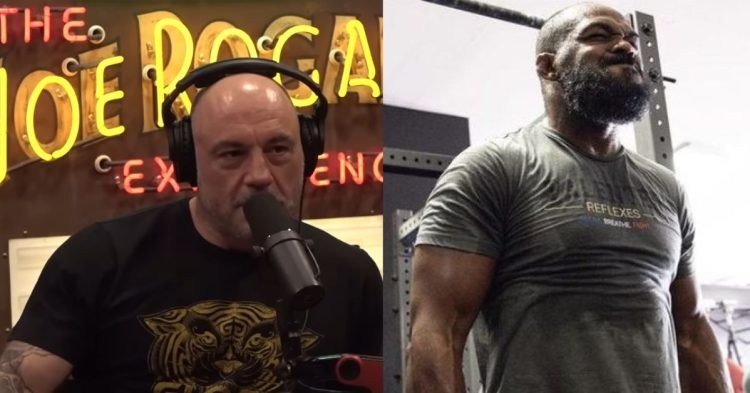 Former UFC champion Jon Jones is about to return to the UFC after more than two years and make his heavyweight debut. Jones is one of the greatest MMA fighters in the world and his comeback is one of the most anticipated events in the promotion.

‘Bones’ relinquished his light heavyweight title after beating Dominick Reyes at UFC 247 and has been out of action ever since. He announced that he would move up a weight class and is now ready to make his UFC return.

However, looking back at Jones’ doping history, UFC color commentator Joe Rogan thinks that the former light heavyweight champ might have used steroids again for his heavyweight debut.

In a recent episode of Joe Rogan Experience, Rogan discussed this with Derek from More Plates More Dates. Rogan said: “When you covered the Jon Jones situation, that was very illuminating to me. I was like, oh okay.”

“Then, you talked about the test levels, the epitestosterone to testosterone ratio, and how it was all off. All of these points seemed to indicate someone who was supplementing with exogenous hormones. It’s a guy who’s a wild dude. He’s doing a lot of wild sh*ts, he’s doing coke. It’s not like his body is a temple.”

Recently, Rogan has spoken up about steroid use in the UFC and also in the entertainment industry. Rogan discussed the USADA incident with Derek and called out Dwayne Johnson.

Rogan thinks that a similar thing might have happened with Jones. ‘Bones’ has been busted numerous times for using illegal drugs and steroids. Also, he has had multiple run-ins with the authority outside the octagon.

Jon Jones is expected to make his UFC return against heavyweight champion Francis Ngannou in early 2023. Just like the fight fans, Rogan is also very excited to see this potential clash. In the same episode, Rogan shared how he thinks this potential fight will play out.

In the same episode, Rogan said: “The grappling of Jon Jones is very difficult to deal with. For a guy like Francis Ngannou, who was primarily a striker and was taken down on multiple occasions by Stipe Miocic, and got really dominated in their first fight. The question is, has Francis gotten better with grappling?

Well, he definitely has because he beat Ciryl Gane with grappling. That was the fight he fought with his blown out leg and he fought Ciryl Gane who is a f**cking phenomenal striker.”

Rogan explains that Jones is one of the most skilled fighters and an elite wrestler. He beat legends like Alexander Gustafsson, Glover Texeira, Daniel Cormier, and more. Jones even took down Cormier who is an Olympic wrestler.

Meanwhile, ‘The Predator’ has gotten better at grappling. He was primarily a striker known for extraordinary power and knocked out his opponents viciously. However, in his last fight against Ciryl Gane, Ngannou utilized his ground games to get a decision win.

Gane is one of the most skilled and technical strikers and Ngannou beat him with a torn MCL and ACL. ‘The Predator’ has been out of action ever since and has undergone knee surgery. But the question remains if Ngannou’s grappling has gotten to Jones’ level.

The fight fans will get this answer when Jones makes his return to the promotion. A super fight between Jones and Ngannou is rumored to take place but the UFC has yet to make an official announcement.