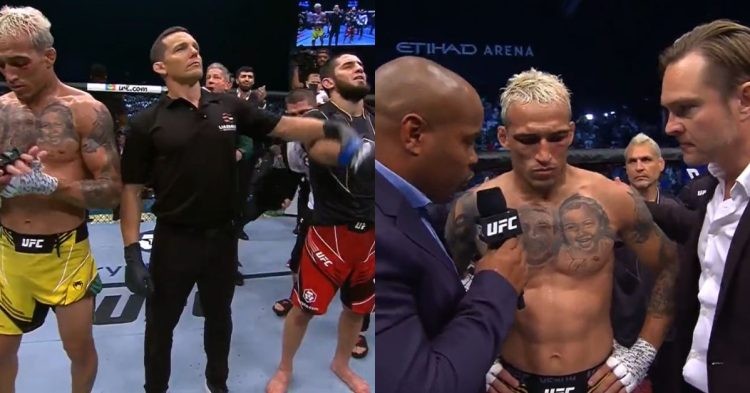 Islam Makhachev shocked the world by beating Charles Oliveira in the main event of UFC 280. This fight had a lot of hype as it was trending on social media for the past weeks. Fight fans and analysts had a long debate on who will win but in the end, Makhachev left the cage with the lightweight belt.

From the start of the fight, both fighters hit each other with bombs and Makhachev dropped Oliveira with a power shot. The Russian was also successful in his grappling as he landed more takedowns and dominated Oliveira for most of the round.

Makhachev brought some more heat in the second round as he was more aggressive in his approach and stunned Oliveira with his striking. However, unlike the rest of the lightweights, Makhachev was very confident in his grappling as he jumped into Oliveira’s guard and locked him in an arm and head triangle.

The Brazilian had no option but to tap out. Some fight fans were left in shock as Oliveira being the better striker was hurt on his feet and dominated on the ground. Moreover, the submission specialist then later got submitted less than 2 minutes into the second round.

In the post-fight interview, Daniel Cormier asked Oliveira how he was feeling after this loss. To which Oliveira replied to DC through his translator:

“You’re a fighter; you know exactly what it’s like. Sometimes we’re here and it’s not our day. I promise you I’m gonna get this back.”

Going into this fight, Oliveira had hoped to reclaim his title which he never lost, but after this upsetting defeat, he will have to wait for his next chance at the title shot. Oliveira further added:

“I promise you. I’m going to get this back.”

A champion through and through, @CharlesDoBronxs goes back to the drawing board. #UFC280

When asked about his plans to get back into the title frame, Charles turned to Dana White and asked him to give him a second chance, before walking away from the cage.

Since the announcement of Charles Oliveira vs. Islam Makhachev, fight fans were very eager to see this much-anticipated bout between two of the best lightweights in the promotion. Both Oliveira and Makhachev entered the main event with a big undefeated win streak, Oliveira with 11 consecutive wins, and Makhachev with 10 wins.

Now after dominantly beating Oliveira, Makhachev has proved that he is the best lightweight in the division. The Russian became the new champion and took back the lightweight strap to Dagestan, like his mentor Khabib Nurmagomedov had promised.

Islam dedicating his title to Abdulmanap and handing the belt to Khabib 🥹 #UFC280 pic.twitter.com/RV1dnxZywB

Islam was very humble after this win as he dedicated the biggest win of his career to Khabib and his late father, Abdulmanap Nurmagomedov. Upon asking about their next plan, Islam and Khabib revealed that they will challenge the P4P king Alexander Volkanovski in a title fight in Australia.

Volkanovski entered the cage and verbally agreed to the proposed matchup. However, it is to be decided by the UFC if Makhachev will face Volkanovski for the mega-fight or Oliveira for the second time.