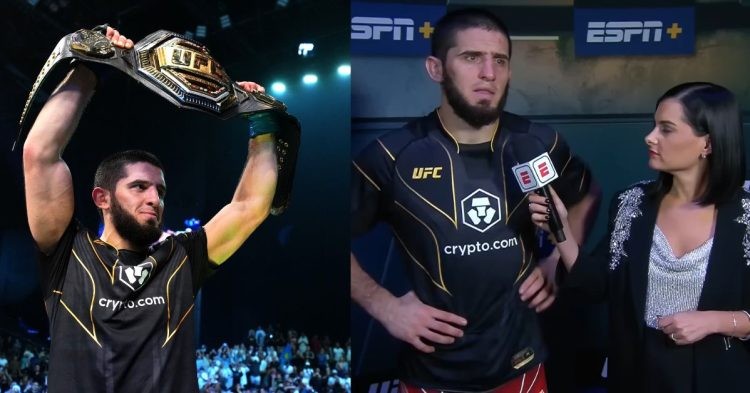 Islam Makhachev is now the lightweight champion after beating Charles Oliveira in the main event of UFC 280. Makhachev proved his doubters wrong after dominating Oliveira both on standup and ground. The Russian submitted Oliveira with an arm triangle in the second round after dropping him with a powerful hook.

After the main event, Makhachev talked to the media about his plans and while speaking about his future in the sport, he also talked about his family. Makhachev said:

“These couple of months I’ve been thinking about my daughter. I just want to come home, hug my mother, father because they are waiting. All my life I’ve traveled everywhere but very soon.”

Makhachev has worked very hard for this win and dedicated his whole life to becoming the champion. But while doing so, he also fulfilled his mentor, Khabib Nurmagomedov’s wishes. Makhachev will now defend his belt against Alexander Volkanovski.

Makhachev is now looking invincible just like Nurmagomedov and in near future, he will face a lot of tough opponents. But for now, Islam wants to get back to his family and embrace them. He also said that he will fight for three or four more years before retiring from the sport.

Islam Makhachev has stopped Charles Oliveira’s incredible 11-fight win streak at UFC 280 and proved people were right to call him Nurmagomedov’s protégé. Makhachev submitted Oliveira, who has the most finishes and submission wins in the history of UFC.

Oliveira started the fight with a front kick and kept up with Makhachev’s pace. However, he was overwhelmed by the relentless pressure from the Russian. Makhachev stunned Oliveira and dominated him on the ground.

The Brazilian also tried for submissions but Makhachev’s wrestling was proven to be superior. In the second round, Makhachev dropped Oliveira before pinning him down and putting in an arm triangle. After Oliveira tapped out, Makhachev’s team stormed in and celebrated this grand victory.

After the fight, Makhachev dedicated this win to his late coach Abdulmanap Nurmagomedov and the late father of Khabib Nurmagomedov. Makhachev said: “He told me many years ago to train hard and I would be the champion.”

With a graceful gesture, Makhachev handed over his belt to his mentor Nurmagomedov stating that he and his late father made him. Makhachev is expected to fight Volkanovski next and also Oliveira soon in the future.