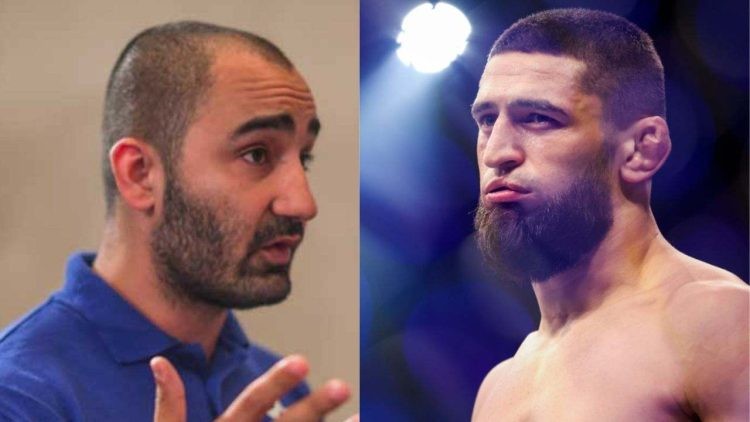 Khamzat Chimaev has made a blistering start to his UFC career. Even though he’s still less than 10 fights into his stint, people are already calling him deserving of a title shot. Moreover, Chimaev himself has spoken about how he wants to be a two-division champ at both Welterweight and Middleweight.

However, Coach Andreas Michael believes that Khamzat still has a lot to learn and work on. More specifically, improve on his mistakes from the Gilbert Burns fight. For the most part, we’ve seen Khamzat fight like he has a flight to catch. Borz has finished 3 of his 5 fights within the first round itself, dominating his opponents with ruthless aggression.

Speaking to ESPN, Andreas Michael gives some insights into what the camp has been like for this fight. ” I think Nate is durable, he’s tough, and he will come to fight. We just gotta be on point and not let him suck us into psychological warfare, you know?” The coach also reveals how they have been working to counter this problem.

As such, it appears as though there has been special attention to Khamzat‘s temperamental game more than anything. Andreas also emphasizes, “Bad luck for everyone because this is not the best version of him, it’s an ongoing project and it’s a development, and it’s getting better and better.”

What Can Khamzat Chimaev Improve from the Burn’s fight?

Khamzat’s fight against Gilbert Burns was an all-out war. For the first time, the Chechen fighter was faced with real adversity in the form of an opponent that could stand and bang with him. During the fight, it was clear to see that Khamzat’s ego was getting the better of him.

Every single time Gilbert would land a shot, Chimaev would immediately retaliate, at times walking into a trap. As such, it was also the first time that Khamzat got knocked down and almost knocked out cold. Although he managed to eke out a decision win, Burns took him to deep waters and firmly tested Chimaev’s resolve.

That is why come Saturday night, Coach Andreas is sure that we will see a newer, improved version of Khamzat. Nate Diaz‘s biggest advantage coming into this fight is his experience and his ability to rile up and outlast his opponents. Although Khamzat’s durability and tank are immense will he be able to evade Diaz’s mind games? We find out Saturday.