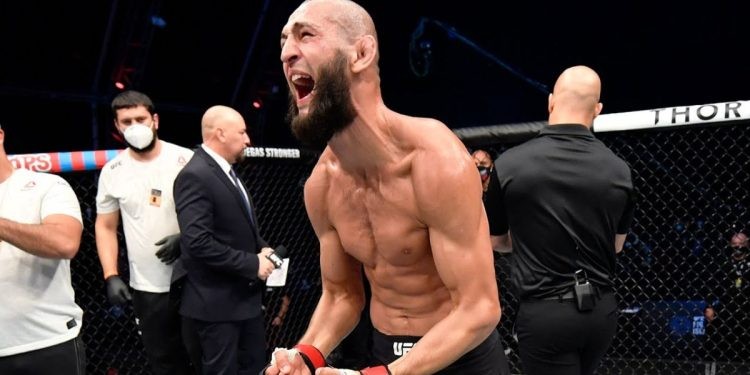 Khamzat Chimaev walked the talk as he picked up a brutal KO win over Gerald Meerschaert at UFC Vegas 11 to record his third straight win inside the UFC octagon. Chimaev has made a name for himself in such a short period of time with his antics on the microphone and dominant performances inside the octagon. With this win, Chiamev has now recorded three straight victories inside the UFC in just 66 days to etch his name once again in the history books.

Cashing in on a WILD night of fights!

UFC President was in complete awe of the rising contender and stated that Chiamev is special and that he has never seen anybody like him. Sharing his thoughts on what’s next for Khamzat Chiamev, White said.

“I believe the guy is special. I’ve been in this game my whole life. I’ve never seen anything like him. He wants to fight again, you know, I’ve never been in a position where I’m like who’s next? How do we get him a fight at? Well, how do we get him over here? How do we do this? How do we do that? It’s fun and I like it and I think when you’re a fight man, a guy like this and that you love to watch and follow and hate. Hey, you know and whatever it might be this is this guy is one of those special Fighters I’ve ever seen. It’s not the most special guy that I’ve ever come across and he kept telling me leading up to this fight. You think I’m a wrestler. You think I’m a wrestler wait till you see my hands what we should do.”

What’s next for Khamzat Chimaev?

Taking on a formidable foe in the form of Gerald Meerschaert, Chimaev came across as ambitious in the lead-up to this fight with fight fans rejecting Chiamev’s prowess so early in his MMA career. However, Chimaev shut his critics as he dissipated Gerald in just 17 seconds of the first round to earn his second straight win at the Middleweight division. Khamzat Chimaev continues to compete at the Middleweight and the Welterweight division. However, he has stated that he wants to continue at the Welterweight division, scheduled to take on Damien Maia next.

Earlier, UFC faced huge criticism after Khamzat Chimaev was booked for two fights without the conclusion of the first fight against Gerald. GM3 took it as sig of disrespect and vowed to shock the world with an upset win over Chimaev. However, that’s not what happened at the fight of the night, with Chimaev picking up a spectacular KO win at the Middleweight division.

Also Read I How Did Tyron Woodley Injure His Rib Against Colby Covinton?

After the impressive win, fight fans were left wondering if Khamzat Chiamev deserves an opponent tougher than Damien Maia in his next fight considering his Welterweight career in light of the KO win at the Middleweight division. Reacting to the same, Dana White said that looking at Khamzat Chiamev, there’s a possibility that the Chechen fighter could have another fight before he takes on Damien Maia.

“I don’t know what to do with him yet. We got some, we got some s**t, we got to figure out before we leave.” White continued, “He might fight before Maia and fight Maia too”