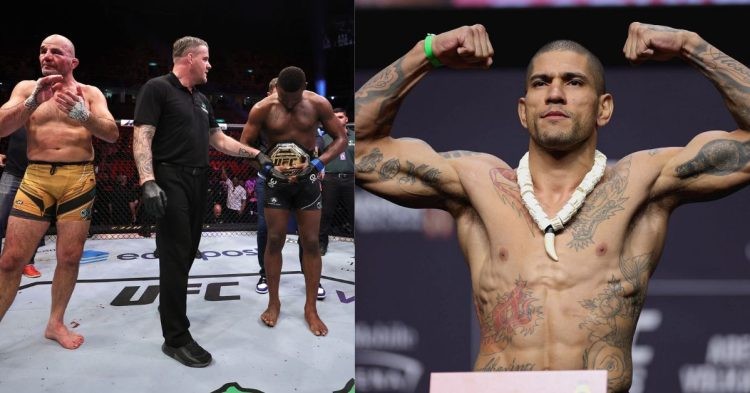 UFC 283 is finally in the cards and fans have a new light heavyweight champion. The main event, Glover Teixeira vs Jamahal Hill, went the distance with Hill picking up the win via unanimous decision. Hill put on a striking clinic, landing 232 significant strikes and showing better defensive grappling skills than many expected him to be capable of.

In light of this star-making performance by “Sweet Dreams,” fans are calling for the new UFC light heavyweight champion to take on UFC middleweight champion, Alex Pereira. “Poatan” is no stranger to the LHW division. He was a double champion during his kickboxing days, holding the Glory middleweight and LHW championships.

Sports journalist, Alex Behunin sent out a tweet calling for this fight and fans seemed to share his sentiment. Here are some of the best replies to Alex’s tweet.

Many fans thought this match would not be competitive given Pereira’s kickboxing credentials.

Jamahal when Alex squares up to him pic.twitter.com/Fj0THsBIAQ

MMA striking vs genuine world class kickboxing. Pereira would probably best him up

Some thought that Jamahal’s experience and fight IQ would be too much too soon for Poatan to handle.

I think if Izzy could hit Alex and wobble him like that. Jamahal will put his lights out. And then the power will be on par and JH is hard to hit.

Pereira isn’t ready for Hill. He will easily get smashed.

And a whole of other fans thought Pereira vs Hill would carry the tantalizing narrative of Alex Pereira avenging Glover Teixeira.

That way Alex was looking at him! He wanted to avenge glover!

If this match does get made by the UFC, it will already have a built-in storyline to promote. Pereira fighting to avenge his coach and mentor’s loss to Hill would be an exciting story for fans to follow heading into this fight. Especially considering Glover will probably corner Alex during a potential fight against Hill.

UFC 283 came to quite a shocking end. After his decision loss to Jamahal Hill, Teixeira was approached by Daniel Cormier in the octagon for the post-fight interview. And Glover unexpectedly announced his retirement despite saying earlier in the week that retirement was the last thing on his mind.

He gave an impassionate and gracious speech in which he thanked the fans and his corner for supporting him throughout his career. Teixeira also revealed his short-term plans for the future after his retirement. He said with the help of a translator, ” I’m gonna focus my energy on Alex Pereira, on Poatan. He’s gonna keep his belt for a while and then go up to light heavyweight.”

Glover Teixeira has famously been one of Alex Pereira’s key training partners. He was present in Poatan’s corner when he won the title off of Israel Adesanya at UFC 281. And as Pereira looks to jump to the division formerly conquered by his friend, Glover’s advice will be invaluable.