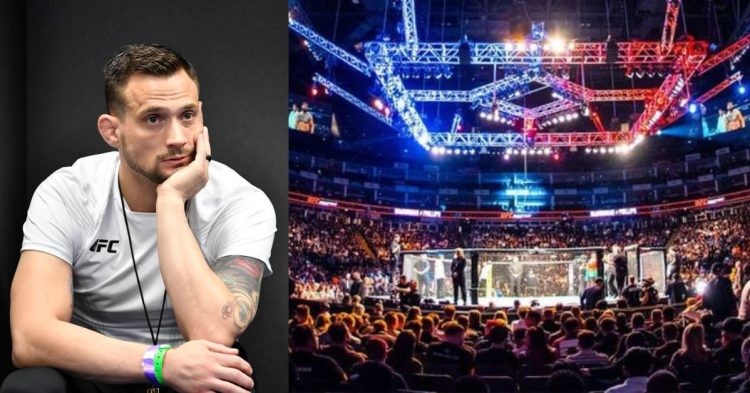 UFC has taken a massive hit after the AGCO (Alcohol and Gaming Commission of Ontario) banned betting in upcoming fights. The harsh step was put forward to stop any sort of odds manipulation, match-fixing, and other integrity issues. Fans are pointing their fingers at MMA coach James Krause.

The AGCO recently released an announcement: “The standards exist to protect the betting public and provide the necessary safeguards against odds manipulation, match-fixing, and other integrity issues. This is not a decision we take lightly, knowing the popularity of UFC events in Ontario’s sports books.”

“However, the risks of insider betting on events and wagering integrity should be highly concerning to all. It certainly is to us. We will continue to work with gaming operators, the OLG, iGaming Ontario, and UFC to ensure that wagering on UFC events meets the AGCO’s Standards.”

The Ontario Alcohol and Gaming Commission of Ontario have required Ontario gaming operators to stop offering and accepting UFC bets “to provide the necessary safeguards against odds manipulation, match-fixing, and other integrity issues.”

The AGCO regulates the gaming industry in Ontario and the state is a major hub that handles wagers for the UFC. However, now any sort of betting by the insiders is prohibited with the decision effective immediately.

Ontario regulators prohibit anyone with access to insider information from betting on fights, including the fighters, coaches, managers, etc. Moreover, this past October, the UFC added a clause that forbids the fighters from waging any fights. It won’t be wrong to say that the centre of this entire controversy was Krause.

The controversy started after a bout between UFC featherweights Darrick Minner and Shayilan Nuerdanbieke in November. James Krause was Minner’s coach and there were rumors that before the bout Minner had injured his knee.

As a result, Nuerdanbieke became a massive favorite leading up to the fight. If this was not suspicious enough, the fight played out exactly his way. In the very first round, Minner was stopped by Nuerdanbieke. After Minner attempted a kick he was seen in pain and his opponent made quick work of him to clinch the victory.

Rumors started doing rounds that this information was leaked by someone in Minner’s team and on the other hand, Krause was also being investigated for suspicious betting activity. The authority investigated this whole incident, and betting on any UFC fights that included Krause was banned.

Why fans are blaming James Krause for the ban on UFC bets?

UFC coach James Krause publicly revealed that he is involved in gambling. In a podcast, he also said that he makes “more money gambling on MMA” than he does anything else. But the promotion had prohibited any fighters, managers, trainers, or family members of the fighters from betting on UFC fights weeks before the Minner fight.

New Jersey Division of Gaming Enforcement notified the state’s sportsbooks today that they are prohibited from taking bets on fights that James Krause is involved in “as a coach, trainer, promoter or fighter.”

it’s crazy that everyone simultaneously knew that this James Krause shit would happen eventually. Insane that anyone thought otherwise pic.twitter.com/1RJAUwS2Uc

This is very bad news for the fans and gamblers who regularly partake in betting on fights. And it seems like Krause is getting all the blame for that. Following the announcement from AGCO, fans took to Twitter to voice their frustration.

James Krause absolutely ruined UFC betting in Ontario. I’m at an absolute loss for words right now, I can’t believe how badly this guy messed it up for the rest of us. Some of us supplement our income with UFC betting. This is just so messed up. It’s like an actual nightmare.

Fuck James Krause. He’s single handily setting back mma and gambling.
He was the coach of a fighter (minner)who was hiding an injury, hrs before the fight a very suspicious amount of money came in on his fighter to lose via first round tko. Which is exactly happened.

James Krause has single handedly jeopardised the legitimacy of our sport all for a Darrick Minner fight.

The saying “pick your battles wisely” comes to mind.

The former fighter-turned-coach was also banned from cornering fighter Miles Johns at UFC Vegas 65 as he was being investigated for the incident. Johns revealed during the post-fight Octagon interview that Krause was suspended. Krause also had a gambling advice channel on Discord which was later shut down.