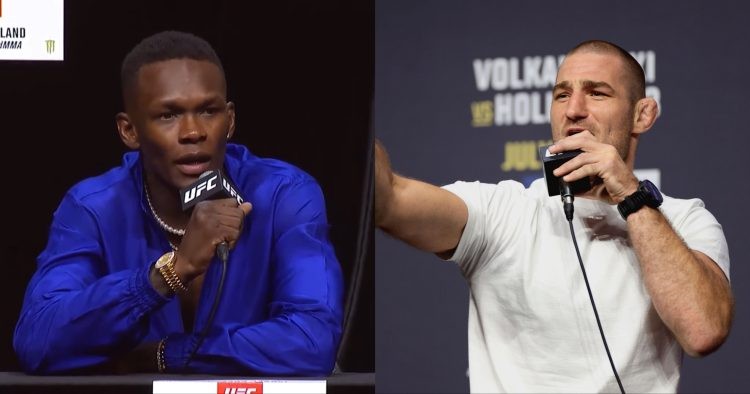 UFC recently held its first big table press conference for UFC 276. All the fighters from the main card were present for the event. But it was Sean Strickland who stole the show and even went toe to toe with Israel Adesanya on the mic. Judging by the audience’s reaction, it seems like Strickland got the better of Izzy.

The middleweight division is going to be very interesting going forward. With the champ wanting to stay active, it was a good chance for both Sean Strickland and Alex Oliveira to grab his attention. Although both succeeded to some extent, It was Sean who entertained the crowd and almost made the champ look bad with his quirky remarks.

Aside from Conor McGregor, ‘The last Stylebender’ is one of the best talkers in the UFC. He usually gets the better of his opponents whenever there is verbal sparring between them. But this time around, the night belonged to Tarzan. From calling out Adesanya’s kinks to his potential drug use, Sean Strickland brought the heat and the fans loved it!

Strickland was in a joyous mood and he started off by making fun of the audience. But he soon turned his attention to the champ. The 31-year-old was asked who the best striker on the stage was. Although he did think about mentioning himself, instead, he pointed his finger towards, Alex Oliveira and brought up the Brazilian’s brutal knockout of Adesanya.

It seemed to irk the champ who quickly jumped on Sean and asked him whether he had seen the fight leading up to the knockout or not. Noticing Izzy’s dismay, Strickland added,

“Oh, I made the champion mad with his fu**ing frosted tips and gay little watch. Oh no!”

At that point, the crowd erupted with laughter. Not the one to back down, Adesanya claimed to have put his hands on Strickland before the press conference. He said,

“Bro trust me, I’ll tell you what, if you win this fight, when we fight, I’ll knock you out (and) I’mma do a Tik Tok dance on your grave”

This might be the greatest line in press conference history pic.twitter.com/aUIpqXHhAo

The champ previously stated that he would offer $3 million to anyone who can bring up any evidence of his steroid use. Sean Strickland also touched on that as well. But he was not so hostile around the steroid allegation. Sean explained,

“I’ll give the guy props. The guy’s the champion man. (But) he did have one b*tch t*tty. I don’t know what that was all about, I’m not calling the man a liar… But real talk, I don’t think he does steroids. I just like to make fun of him. A lot of this sh*t is not true… But j**king off to cartoons is true.”

Will Adesanya vs Strickland take place after UFC 276?

Israel Adesanya did offer some advice to both Alex Pereira and Sean Strickland. He asked them to focus on their contest on Saturday instead of trying to set up a fight with him. It is worth mentioning that the victor between Alex Pereira vs Sean Strickland will face the champion next.

Sean Strickland and Israel Adesanya get heated at the #UFC276 press conference 🔥 pic.twitter.com/8YGy7Bw8r1

Because of Alex’s history with Izzy, the fans had more interest in seeing them run it back in the Octagon. However, that has changed significantly after Strickland’s dominance of Israel Adesanya on the mic. However, wins on Saturday, the build-up to their bout against Adesanya will be one for the ages.

But for that to happen, Israel will have to beat Cannonier at UFC 276, which goes down on July 2nd inside the T-Mobile Arena in Las Vegas.