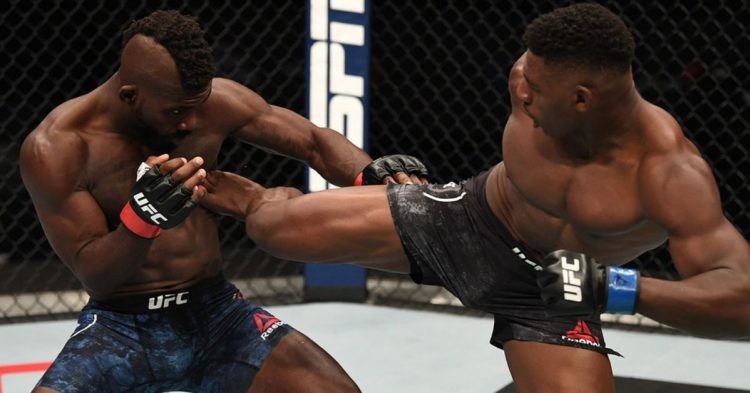 Who loves a stunning knockout more than the UFC president, Dana White. After all, he was the guy who started the fight bonus tradition so that the fighters will have a huge incentive to look as impressive as they can.

That’s what motivates the young UFC fighters to make a statement and finish the fight as brutally as they can. And that’s what we saw when UFC middleweight Joaquin Buckley took on Impa Kasanganay in the prelims of UFC Fight Island 5. This fight marked the best knockout of 2020 and probably the biggest knockout in UFC’s history.

Well, the video of this knockout has done record numbers for UFC on social media. And Dana White can not be more pleased. After the brilliant knockout when Buckley was giving the post-fight interview, Dana White showed up to congratulate the young fighter on such a beautiful outing. Dana White seemed extremely happy as he said:

“I always talk about when you’re on a card, right?” White said. “How do you stand out? My phone is blowing up. Kevin Iole (expletive) hit me up for a quote because he’s already doing a story on you. Everybody is saying, ‘Just give him $200,000 tonight. Give him every bonus.’ Nobody has ever seen anything like that. Sean Shelby texted me and said, ‘Write him a check right now for $50,000 and go give it to him before he gets out of (there). Incredible.”

UFC Fight Island 5 was a crazy card. It was full of impressive performances. Even the main event marked an emphatic return of Cory Sandhagen who outclassed Marlon Moraes and finished him with a wheel kick in the second round. With all those great fights in the night, Dana White did have some difficulty while handing out the bonuses. But, we all knew one thing for sure that Jaoquin Buckley was getting the 50Gs for that knockout.

“Yeah, I was conscious of it because he caught my foot the first time, you know what I mean. But I was just hesitant then to throw it. The second time I said why not. When I threw it I connected and I didn’t know I knocked him out until I’d seen his body go stiff. I was like ‘Yeah, that’s game over, that’s match’. “