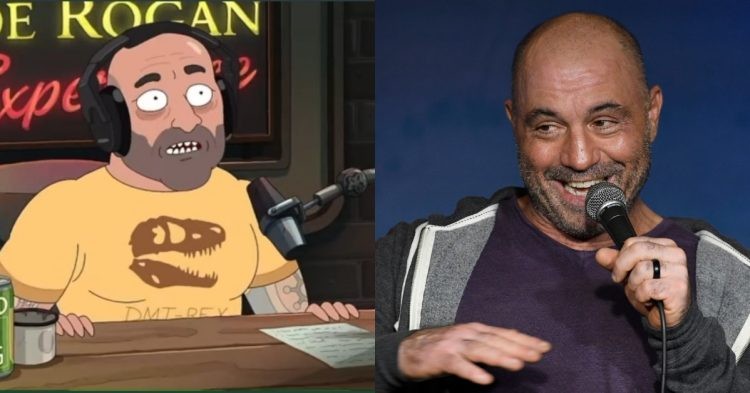 There is no denying that Joe Rogan is a pop-culture icon. From having the biggest podcast in the world, ‘The Joe Rogan Experience,’ to be the colour commentator for UFC, Rogan is everywhere! He is also a great stand-up comedian who has put out multiple comedy specials throughout the years. His popularity just got a major boost as he makes a cameo in ‘Rick and Morty.’

Created by Dan Harmon and Justin Roiland, ‘Rick and Morty’ is a sci-fi animated show which airs on Adult Swim. It is currently in its sixth season and it featured a cameo from Joe Rogan in its episode titled, ‘JuRicksic Mort.’ Although Rogan himself did not voice his character, the show perfectly capture the whacky nature of Joe’s podcast.

Rogan, who is Jiu-Jitsu black belt himself, is a big enthusiast for MMA. In the episode, he was seen giving out Jiu-Jitsu lessons to an alien species of dinosaurs. His character was wearing a t-shirt which ‘DMT-Rex’ on it. It was a direct reference to Rogan’s interest in psychedelic drugs.

Joe Rogan cameo in the new episode of Rick and Morty lmao pic.twitter.com/JfshgaPRTH

Rogan has also been referenced in another beloved American animated show ‘Family Guy.’ Joe himself is no stranger to acting as he started off in acting while doing stand-up comedy in his early days. He has made cameos in ‘Chappelle’s Show,’ ‘Silicon Valley’ and ‘MADtv.’ However, his breakout role was in ‘NewsRadio’ where he played the character of Joe Garrelli.

Rogan also hosted the famous reality show ‘Fear Factor’ from 2001-2006. He came back for another run from 2011 to 2012. He has also appeared in movies like ‘Here Comes the Boom’ and 2017’s Will Smith starring movie ‘Bright.’ On both occasions, Rogan played himself.

Fans react to Joe Rogan popping up in Rick and Morty

Joe Rogan’s cameo in Rick and Morty was a dig at his public persona. During most of his podcasts, The 55-year-old is hanging out with his friends and talking about conspiracy theories. More often than not, all the guests involved are intoxicated. So they are having more of a fun time rather than trying to impart knowledge to the world.

Earlier in the year, Rogan was in trouble as he was accused of spreading misinformation through his podcast regarding Covid-19 vaccination. He also had to issue an apology regarding the use of a racial slur which upset a lot of people. However, it looks like all the controversies are behind him and being referenced in such popular cartoon shows just signifies his relevance in the current society.

LMAO it’s so on point. the cbd drink, the shirt, the rnc

What was your take on Joe Rogan’s comical portrayal in the sixth season of ‘Rick and Morty?’ Did you find it funny? Let us know in the comments down below.