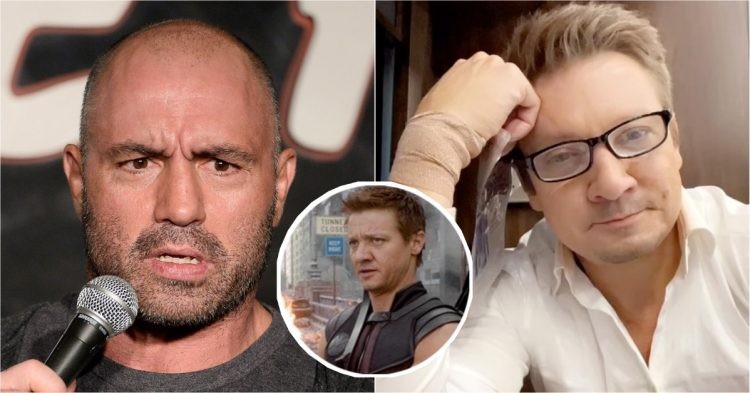 Jeremy Renner did not want to play Hawkeye in his 50s. (Credit: Instagram)

UFC commentator Joe Rogan is certainly a fan of the Marvel spectacle. He enjoys seeing the larger-than-life superhero characters on the big screen. After Ironman actor Robert Downey Jr decided to retire from playing the character, Rogan insisted that RDJ should come back to the role. However, one character that Joe does not really care about, is Hawkeye, played by Jeremy Renner.

In an episode of his “The Joe Rogan Experience” podcast, Joe revealed that characters such as Black Widow and Hawkeye do not really belong in the Avengers. As superhero fans would know, Ironman, Captain America, and Thor have powers that are beyond an ordinary human being. He also compared Black Widow to the UFC flyweight champ Valentina Shevchenko.

Rogan was not too pleased about the inclusion of Hawkeye either. The character is a seasoned marksman who is extremely potent with a bow and an arrow. However, alongside characters like the Hulk and Vision, Hawkeye’s usefulness can be put into question. However, it does seem like the actor Jeremy Renner also agrees with Rogan. He also did not want to keep playing character into his 50s.

During an appearance on “The Tonight Show” hosted by Jimmy Fallon, Renner implied that he thought would walk away from playing the character before he turned 50.

Jeremy Renner is a beloved actor. Even before joining Marvel, Renner was already a household name in the Hollywood community. However, his popularity went through the roof in 2011, when he made his debut as Marvel’s Hawkeye in the first Thor movie. He had a huge role in 2012’s “The Avengers.” Since then, Renner’s character played an integral role in the Marvel storylines.

Last year in 2022, Renne got his solo TV show on Disney+. So it is quite evident that Jeremy Renner is a hugely popular figure among the fan base. Hence, his recent accident shocked the fan base. Renner was involved in a snow plowing accident. Apparently, Renner was run over by his own snow plow while trying to help a family member.

The snow plow weighed over 1400 lbs and it caused blunt chest trauma and bone-related injuries. The 52-year-old actor has also suffered some serious damage to his legs as well. Some insider reports also suggested that his family members are worried about his legs as well. Renner may lose a lot of functions in his legs. But more worryingly, he may also require amputation!

It is important to note that there is no official statement about the matter. Renner has been slowly recovering from the injury and recently updated his fans about the condition. Fans will hope that Renner regains his full health and gets back to playing the role of Hawkeye.