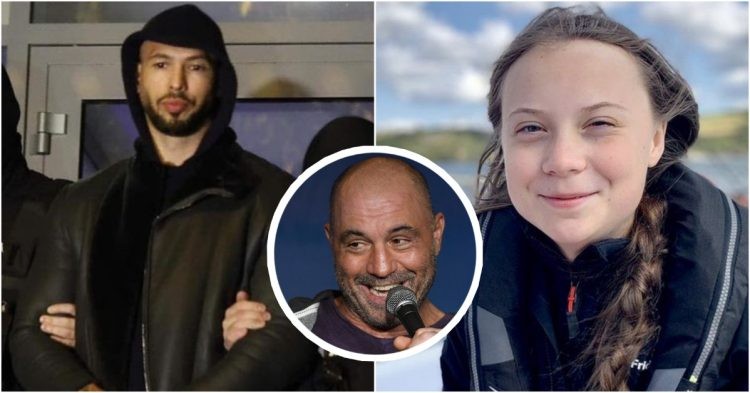 Joe Rogan has his say on Tate-Thunberg rivalry. (Credit: Twitter)

Andrew Tate’s arrest is dominating the world! The Internet broke on December 29th when news came out of his arrest. Since then he was put in 30 days of detention. However, the reaction to his arrest has been somewhat polarizing. While some are happy with it, others are outraged by the fact that Romanian police have detained him! However, Joe Rogan seems to have an interesting take on the matter.

Before his arrest, Tate had a huge Twitter feud with Greta Thunberg. Due to her activism for climate change and social work, Greta is a massively popular figure on social media. Hence, it was perhaps not the best decision for Andrew to pick a fight against Thunberg. While her huge following on social media was a bonus factor, Greta handled the matter herself.

Thunberg responded to Andrew’s initial call out with a savage reply which got almost 4 million likes! However, it did not sit right with Andrew and the former kickboxer decided to record a response. Later, it was speculated that a pizza box, featured in the video, may have caused Tate’s detention. Hence, Thunberg could not help but leave Tate with one final burn and Joe Rogan seemed to enjoy it!

Joe Rogan recently had a podcast with Dave Portnoy. For fans who are unaware, Portnoy is the creator of Barstool Sports. UFC fans will especially remember the media outlet as they are a big sponsor for both Paddy Pimblett and Molly McCann. During episode no. 1920 of “The Joe Rogan Experience,” Portnoy and Rogan shared their thoughts on Tate’s arrest.

While Joe certainly hopes that Tate does not get punished for any crimes that he did not commit, the 55-year-old also loved the Tate-Thunberg rivalry. As the fans know, Rogan is massively against censorship. Hence, he liked the fact that Tate was allowed to be on Twitter. The UFC commentator especially loved the fact that the lack of censorship allowed the beef to play out before the world!

During his podcast, Joe Rogan added, “I think you should be able to (be on social media). I don’t think banning people is the way. I think this exchange with Greta Thunberg is a perfect example of how to counteract that. Like she just mocks him and then he gets arrested and she has the f***ing tweet of the year making fun of his arrest. In a f***ing perfect one liner. ‘That’s what happens when you don’t recycle your pizza box.'”

As far as Tate is concerned, he is still in detention. There are reports that he may face up to 20 years in prison if he is convicted for the alleged human trafficking charges.

After raiding his luxury villa in Romania, the authorities have reportedly seized his cars as well. However, there were reports that Tate’s appeal against the detention order was not denied. So it remains to be seen what unfolds in the coming few days.