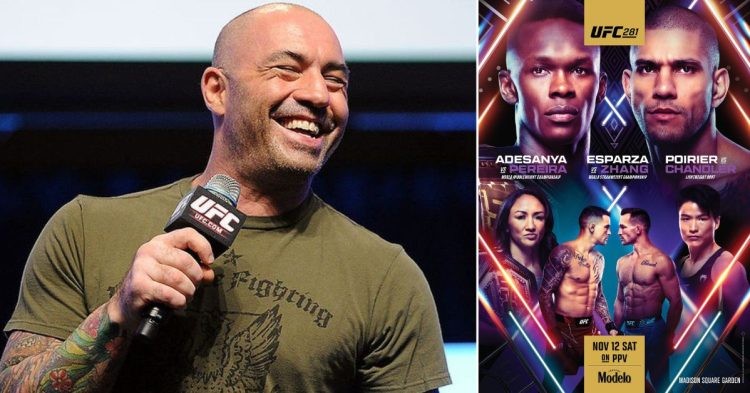 Joe Rogan will be back in action for UFC 281 behind the commentary desk after UFC officially announced the broadcasting team for Israel Adesanya vs Alex Pereira set to go down this weekend on November 12 inside Madison Square Garden, New York.

UFC 281 will feature Joe Rogan, Daniel Cormier, and Joe Anik resuming their broadcasting duties behind the commentary desk for arguably one of the most awaited showdowns in UFC Middleweight history per Mike Bohn. UFC also revealed that Teddy Atlas, Anthony Smith, and Paul Felder will be taking charge of the post-fight show.

Under the bright lights of the Big Apple, #UFC281 is ready to shine 🍎 pic.twitter.com/Db1o4ddhCI

Joe Rogan will return after a two-month hiatus and fans couldn’t have been more excited. Rogan missed out on UFC 280: Charles Oliveira vs Islam Makhachev which took place in Abu Dhabi. Rogan had revealed at the time that he would be traveling to London. Moreover, he has earlier stated that he doesn’t like to travel for UFC events outside the United States.

When is Israel Adesanya vs Alex Pereira?

UFC returns to Madison Square Garden for the much anticipated UFC PVV. This will mark the first time since UFC’s last PPV at the iconic stadium featuring Kamaru Usman and Colby Covington for the Welterweight gold.

Israel Adesanya and Alex Pereira will go down on November 12 in the United States and for fans watching in New Zealand, the United Kingdom, and Australia, the event will take place a day later on November 12 due to time-zone differences.

The event will be available exclusively on UFC PPC. However, for British fans, it will air on BT Sports and will be a non-PPV event.

In the US, the main card of UFC 281 will air at 10 pm ET / 7 pm PT. Meanwhile, in the United Kingdom, it will go with on November 13 at 3 am GMT. For fans in New Zealand, Israel Adesanya vs Alex Pereira will begin at 4 PM NZDT on Sunday and 2 PM AEDT in Australia.

UFC 281 will feature some exciting bouts other than the UFC’s Middleweight title fight. Carla Esparza will look to defend her strawweight gold against the dangerous Weili Zhang. Dustin Poirier also returns to action against Michael Chandler in a possible title eliminator on the main card.

Dominick Reyes also makes his UFC return after more than a year to take on Ryan Spann. Frankie Edgar will compete in his retirement fight in New York, and at 41 years old, he will finally rest his gloves after an illustrious MMA career.