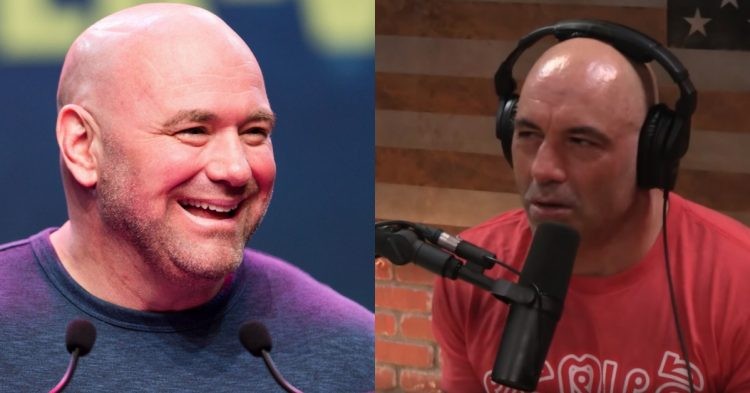 Joe Rogan and the UFC have had a great partnership over the years. The actor-comedian joined the company in 1997 as a backstage interviewer. After years of on-and-off appearances, Joe finally signed with the company on a full-time basis in 2002. However, it looks like his association with the company will continue only on one condition!

In a recent episode of his world-famous podcast, ‘The Joe Rogan Experience,’ Joe revealed that he will not continue with the company if its president, Dana White, is not a part of it anymore. Not only business associates but Dana and Rogan are also extremely close friends as well!

During the most recent controversy surrounding Joe regarding some of his past comments, the UFC and Dana White certainly had Rogan’s back. Although Rogan missed UFC 271 due to scheduling conflicts, he pretty much worked on all the other major PPVs. So there is certainly a loyalty between the two. Hence, it is natural to hear that Joe wants to leave UFC in absence of his friend.

“If Dana leaves, I’m gone. That’s in my contract.” (h/t via MMAFighting)

The Ultimate Fighting Championship (UFC) held its very first event on November 12th of 1993. After some initial success, they were rapidly going out of business in the late 90s, But that is when Dana White and the Fertitta brothers came to the scene. They bought the company in 2001 at the cost of a mere $2 million and Dana joined as the president.

However, due to its extremely violent nature, the promotion had to hold much smaller shows in Las Vegas. But Joe Rogan, who was no longer working with the UFC at the time, was in attendance for some of the events. The company was happy to have him in the shows as they were trying to grow their brand. Rogan was doing stand-up comedy and acting gigs at the time.

So he was definitely a celebrity and the company wanted to utilize that. Joe was a lifelong fan of the UFC and was extremely knowledgeable about the sport of MMA. Impressed by what Rogan had to say, Dana offered him a spot in the commentary booth. Although Rogan turned it down initially, Dana convinced him to take the job later.

Joe tried it out once in 2002 at UFC 37.5 and the rest in history. Dana has previously stated that Joe was a big part of the growth of the company and makes the stature of the events much bigger when he’s working. Although Joe only does the big PPVs, the fans will definitely miss him once he is not part of the company any longer.