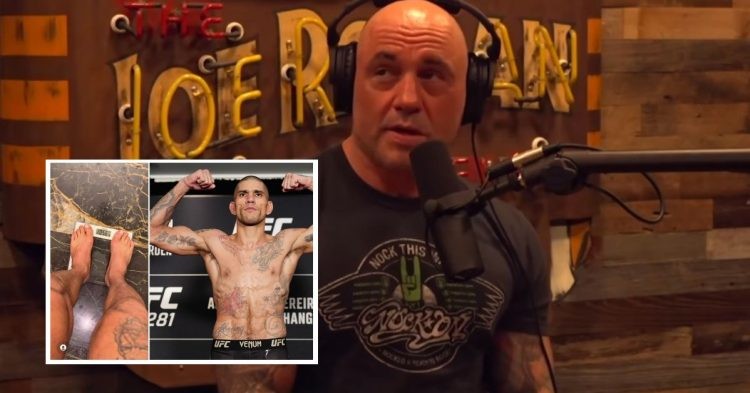 Alex Pereira is a “giant” UFC middleweight. The former two-division Glory kickboxing champion used to compete in the light-heavyweight division and was knocking his opponents there as well. Now, a mixed martial artist, Pereira has moved back to the 185 lbs division and is making his opponents pay with his monstrous left hook.

Taking on archrival Israel Adesanya, Pereira’s power was once again on display as he became the first fighter to hand a stoppage loss to the Stylebender inside the UFC Octagon. Speaking about UFC 281, Joe Rogan had huge praise for Pereira’s performance. However, he did not seem too impressed with Pereira cutting down an incredible amount of weight to get down to the Middleweight limit.

He even went on to say it was “sanctioned cheating” on Pereira’s part, all the while adding that a lot of other fighters do that as well.

It won’t be wrong to say that weight plays a huge factor. However, it’s equally important to note that it can often go against the fighter.

Did Alex Pereira’s weight help in the fight against Israel Adesanya at UFC 281?

Pereira’s weight definitely helped in the fight against Israel Adesanya. Not just the fact that he could take Adesanya’s punches, but also in terms of the power he could generate being the heavy guy.

On the flip side, fighters like Khabib Nurmagomedov and Khamzat Chimaev have shown to benefit immensely from the 24 hours window provided from the time of the weigh-in. As for Alex Pereira, it’s safe to say it seems to be working in the favor of Poatan, who did not look too tired heading into the fifth round against someone like Israel Adesanya.