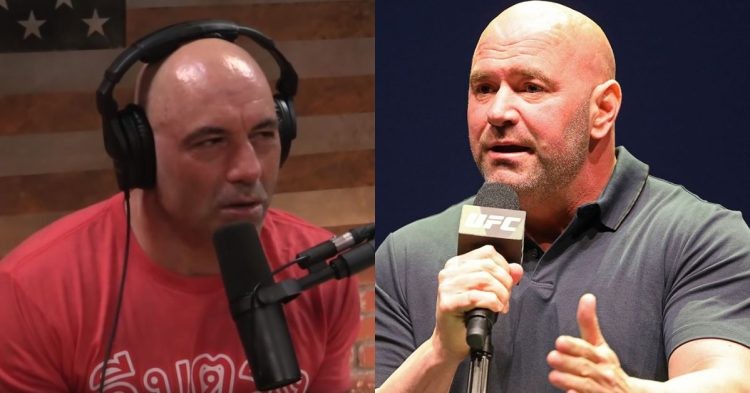 Joe Rogan and Dana White are two figures that have become synonymous with the UFC. Neither was present at the inception of the company. However, it has become impossible to think about the UFC without their presence looming large.

Either of the two walking away would signal the end of an era for the UFC. And that may soon end up becoming a reality. Dana White once stated in an interview that even though his retirement is quite far off, he sees the light at end of the tunnel. However, the recent controversies surrounding White may end up forcing his hand.

And if Dana is fired from UFC Presidency, it seems Joe Rogan will be the first person to follow him out the door. In an episode of the JRE podcast with Will Harris, Joe Rogan revealed the details of a particular clause in his contract. He said, “I have it in my contract that when he leaves, I leave. He brought me in. I’m like, ‘I don’t wanna work anybody else.’ It’s so easy working for him, he’s so wild and so crazy.”

Evidently, Joe Rogan loves working for Dana White and really respects him. This is regardless of his feelings towards Dana’s other ventures. And both Dana White and Joe Rogan leaving the UFC at the same time will be a huge blow for the company and MMA as a whole.

Will the UFC fire Dana White for slapping his wife?

Following the release of the video of him slapping his wife, Dana White caught a lot of flak from the media. Several news outlets called for the UFC President to be fired. His latest business venture, Power Slap, was also delayed following the backlash from this.

However, Dana immediately came out with an apology video addressing the incident. He offered no excuses, taking full responsibility. Several fighters and personalities in the MMA world came to his defense.

Even the UFC and its partners seemed to be doing their best to save White. ESPN infamously discouraged its employees from covering the incident. This caused a media storm as many criticized the business practices employed during this scandal.

The initial outrage sparked by the TMZ video, however, seems to now have died down. By weathering the early storm, Dana White’s position as the face of the UFC’s corporate ladder seems secure.

And despite his public image being tarnished, it does not look like Dana’s future with the company is in any form of jeopardy at the moment. However, unexpected occurrences may end up affecting this.