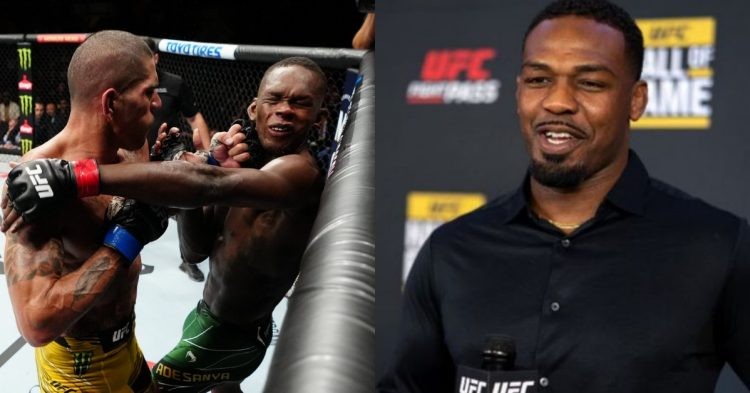 It looks like Jon Jones kept a keen eye on the UFC 281 fight card. He was active on social media throughout the night. Earlier, he commented on Dominic Reyes’ bad loss to Ryan Spann in the prelims of the event. Jon also shared his reaction to the main event where Israel Adesanya suffered the first KO loss of his MMA career.

As fans know, Adesanya and Jones are not on good terms. They had some arguments online in the past and expressed their wish to fight each other. Although the bout did not happen, they never made amends. Neither waste any opportunity to take jabs at one another. Hence, fans thought Jon would troll Adesanya for his loss to Alex Pereira at MSG.

It’s already yours Champ, Congratulations! Incredibly happy for you and your team. 🙏🏾 🇧🇷 https://t.co/GGk1kOCsvx

But, surprisingly, Jon chose not to comment on Izzy’s loss. After the conclusion of the main event, Jones sent out his congratulations to the new champ. However, one eager fan wanted Jon to mock Adesanya. But, in a display of sportsmanship, Jones shut down the fan immediately and implied that he would not make any derogatory comments toward The Last Stylebender.

Now why would I go and do something like that? https://t.co/3bKsKaOAFu

There were talks that Jon Jones would fight at UFC 282. But, Dana White clarified that Jon will not make his UFC return this year. There are rumors that Jonny Bones will take on the heavyweight champ Francis Ngannou on his heavyweight debut in 2023

UFC 281 was everything that the fans thought it would be! All the fights on the main card ended in a finish. Dan Hooker opened the night with a second-round KO win over Claudio Puelles. Chris Gutierrez knocked out Frankie Edgar in the veteran fighter’s retirement bout. Michael Chandler and Dustin Poirier had the fans on their feet as they put on an amazing contest, which Poirier won via third-round submission.

In the co-main event, Zhang Weili submitted Carla Esparza to become a two-time UFC strawweight title holder. But, all eyes were on the main event where the champ Israel Adesanya squared off against Alex Pereira. Adesanya almost knocked out Pereira right at the end of round 1. However, Pereira survived as time ran out. Alex then had a decent second round.

But Adesanya applied his grappling in the third round and tired out Pereira. Alex seemed out of gas in the fourth round as Adesanya was having the performance of a lifetime. The 33-year-old was landing at will on Pereira and it looked like he was going to get his hand raised. By the start of the 5th round, Adesanya was winning the bout 39-37 in the judges’ cards.

However, a desperate Poatan gave it his all in the final round and got the win via stoppage. Israel Adesanya is now 0-3 against Alex Pereira in kickboxing and MMA. Although it looks like Adesanya will get an immediate rematch, can he find a way to beat Pereira? Only time will tell.