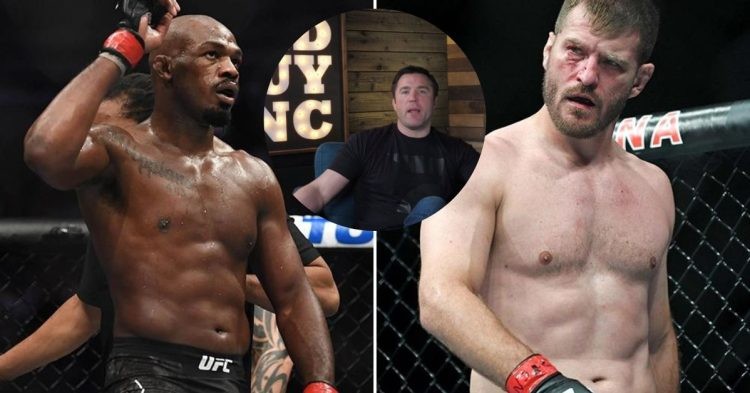 There have been some developments regarding Jon Jones coming to fight Francis Ngannou. Earlier it was stated that Jones will have a fight against Stipe Miocic for his welcome fight in the heavyweight division. But there was another possibility of UFC making Ngannou defend his belt against Jones later this year.

According to Ariel Helwani, it is still possible, but Jon and Francis colliding this year is something Chael Sonnen seems skeptical about. Sonnen on his Youtube channel discussed that Jon ‘Bones’ Jones would be making his long-awaited octagon return in December of this year. Chael said:

“They want to do Jones vs. Ngannou on that date, if they can’t get Francis that’s where Stipe comes in.”

As per Sonnen, the UFC is keen on making Jones vs. Ngannou fight happen but if they can’t get the current heavyweight champ for the mega-fight, they will bring in Stipe in the place of Francis.

Another possible reason why Francis would be unable to get ready for this fight this year might have to do something with his weight. Speaking about Ngannou’s reported weight from a couple of weeks ago, Sonnen said:

“If Francis is 300 pounds and I’m sure it’s an amazing looking three hundred pounds, my point being though it’s calories in versus calories out.”

If you’re training and you’re active Francis at 300 pounds, it just tells you maybe he isn’t fully back. That’s a rumor and that’s speculation at best but that’s what we have to go on,” Sonnen added.

According to Chael, this might just be another rumor and without an official announcement from the UFC, we can’t be sure if this fight going to happen or if Jones will get Miocic for his comeback fight in his heavyweight debut.

Jon Jones Might Fight Stipe Miocic for His Comeback Fight

While Jon Jones facing Francis has not been official yet, it is confirmed that Jones will return to the UFC later this year and in the Heavyweight division.

The probability of Jon Jones facing Stipe Miocic for the Interim Heavyweight Title is still high. This is because, in the above video, Sonnen is skeptical about the matchup of Jones and Ngannou for December this year.

In the aforementioned video, Sonnen said:

“We don’t get a lot of information about the champ… He’s nursing a knee injury.”

Talking about the Jones vs. Ngannou fight, Sonnen added:

“Nothing to see here but that is very different than Francis coming back to what would be the biggest match of his life [against Jones]. By the way, where are we at guys? We’re almost at September…three and a half months, training camp? For a guy that’s completely healthy in Jon Jones.”

As per the report, Stipe Miocic would be the substitute opponent for Jones if they fail to get Francis for the fight. And according to Sonnen, it is a far-fetched idea for Francis getting back in shape within three months.