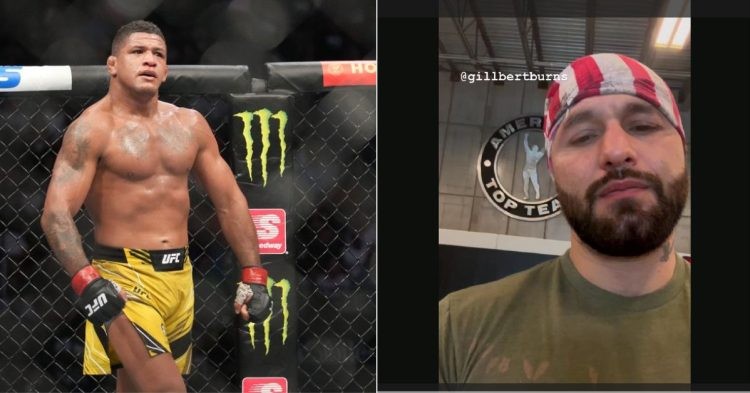 Jorge Masvidal finally breaks his silence on Gilbert Burns expressing an interest to fight Gamebred in Brazil. Masvidal called a lie on Gilbert Burns’ claims that he accepted to fight him on more than two occasions, the former UFC Welterweight title challenger slammed the Brazilian fighter and demanded he faces him inside the Octagon when UFC goes to London in 2023.

Just letting everyone know that @ufc offered me @GamebredFighter 3x First time was for Nov 12. He said he needs more time, second time for Dec 10 he said he was going to 🇧🇷 to fight me and now he just said no again! 🤷🏾‍♂️ so I guess the B from his BMF belt doesn’t stand for bad 🤦🏾‍♂️

“Hunter, if you are hearing this and when you see this, can you please tell this Bi**h I never agreed to November, December, or January? I have had court cases, I have had different things, a bunch of things where I haven’t been able to decide who I want to fight.” Masvidal said through a post on his social media platform.

It won’t be wrong to say that the court dates in question are with respect to his physical altercation with Colby Covington earlier this year. Masvidal got into a fight with Covington outside of a Hotel in Miami.

Jorge Masvidal has been charged after an altercation Monday night, according to a Miami Beach police report obtained by @mikecoppinger.

The victim, who lost teeth, wasn’t identified after invoking that right under Marsy’s Law.

As for when we could see Masidal back inside the Octagon, here’s what Gamebred had to say.

“Now I have gotten some much better news, on today, and guess what! If you want to get your a*s whooped when Leon Edwards defends that fucking belt in England, I will gladly beat the living s*it out of you Gilbert. If not, shut the fu*k up.”

Earlier, Burns had called out Masvidal for a fight in Decemeber and asked for a match-up in Brazil. UFC will head over to Rio in January for UFC 283. It’s safe to say, the Brazilian ace is looking for a fight in his home country.

It looks really unlikely that Jorge Masvidal will fight Gilbert Burns next. It’s safe to say Durinho will look to fight in Brazil without fail and has seemingly accepted Neill Magny’s call-out. Whether or not Burns will make a quick turnaround to take on Jorge Masvidal for UFC London, remains to be seen.

It’s important to note UFC PPV in London will likely take place in the first half of 2023. It will be quite a feat if Burns managed to make that happen. Regardless, there’s not going to be a problem in finding an opponent for Jorge Masvidal, who will look to bounce back to the winning column after three back-to-back losses to his name.

Masvidal’s last UFC outing came against Colby Covington back at UFC 272 in a five-round headliner. Meanwhile, Burns was last seen against Khamzat Chimeav back at 273.

Jorge Masvidal had earlier called out Leon Edwards for a showdown in England. However, looking at his recent comments, it looks like he has gone past the idea of fighting Edwards but is certainly looking to share the card with the British fighter.

The last time both these fighters shared the card was when Masvidal stunned the London crowd with a vicious KO win over Darren Till, while Edwards picked up a unanimous decision win over Rafael dos Anjos. And what followed backstage is history! You might remember it with the phrase, “three-piece and a soda.”

Should he emerge victorious, and Edwards defends his gold, it’s safe to say we are in for a huge title fight between Edwards and Masvidal. However, for the time being, it’s all hypothetical.