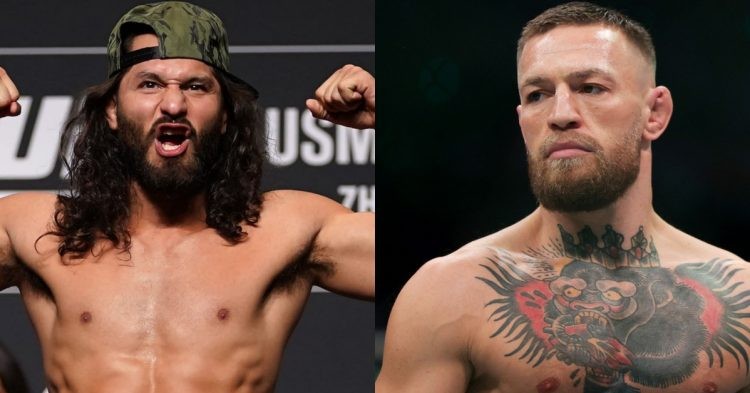 Jorge Masvidal vs Conor McGregor next? (Images via Twitter)

Jorge Masvidal wants Conor McGregor as his next opponent. Masvidal and Conor have been at odds since 2019. Jorge rose to prominence after back-to-back wins over Darren Till, Ben Askren and Nate Diaz. In 2020, there was a certain point where it seemed they were about to cross paths. But the worldwide pandemic prevented that from happening.

Despite there being a gap of two years, Jorge seems to have revitalized the rivalry between the two. Conor recently made a remark about Jorge’s intelligence, which sent the Gamebred in a frenzy. He has attacked McGregor almost on a daily basis ever since Conor’s jab at him. It is very apparent that Jorge is using the opportunity to get a fight against Conor.

During a recent interview, Jorge took his digs at Conor one step further. He has alleged that McGregor uses cocaine and he is fearful for Conor’s life. Hence, Masvidal wants to have the biggest payday of his life before anything bad happens to the Irish fighter. Masvidal added,

“Before this guy overdoses on cocaine and then the fight never happens and I don’t get to make all that easy money, I just want to break Conor’s face. Let’s get that paycheck, let’s get that out of the way, sell the most pay-per-views ever before this guy does harm to himself or somebody else.” (h/t via MMA Junkie)

Will Jorge Masvidal get the money fight against Conor McGregor?

The Street Jesus previously claimed that Conor McGregor was on steroids. Now he makes another allegation about Conor using cocaine. Although there is no evidence of Conor using any sort of banned substances, these repeated claims from Masvidal are a ploy to get a response out of McGregor.

After his humiliating loss to Colby Covington, there were rumours that Jorge may very well look to retire. But since then, the 37-year-old clarified that he is more than open to continuing fighting. However, he has fallen far behind the elite fighters in the welterweight division. Hence, Masvidal does not have a lot of other options in terms of big fights.

As a result, the prospect of a bout against Conor McGregor becomes huge for him. The way his career has gone in the last 2 years, the McGregor bout will be the last super-fight of his career. Especially if Masvidal loses, he will be forced to fight the upcoming contenders, instead of being in title fights. So the Conor fight is both financially lucrative and meaningful for his career.

But the question arises, will the fight ever happen? There was a lot of speculation regarding Conor McGregor fighting Charles Oliveira for the vacant lightweight title. But a report suggests that Oliveira will be fighting Islam Makhachev at UFC 281 instead of McGregor. That leaves Conor in need of an opponent for his return bout. It makes the possibility of a Jorge Masvidal fight much more prominent.