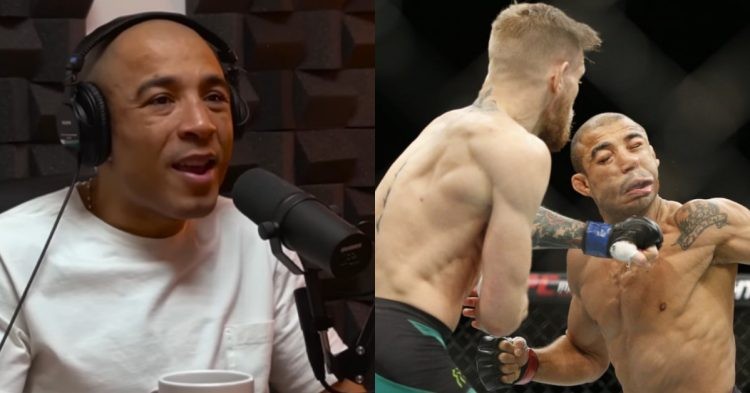 Jose Aldo has recently retired after 18 years of fighting inside an MMA cage. The former UFC and WEC champ has been in a lot of major fights and has headlined a countless number of PPVs. In a career that was full of highs, one glaring stain on his resume remains his fight against Conor McGregor at UFC 194. It was the first time Aldo had been knocked out in his career.

In 2015, he was set to fight Conor at UFC 194. Ahead of it, the UFC arranged for a world tour with them holding press conferences in Ireland, Brazil and the US. The whole tour was filled with memorable moments and Jose has finally opened up about what went on behind the scenes.

In a recent Connect Cast podcast, Aldo spoke on Conor’s drunk dialling and gave his true verdict on the Irishman’s character.

“It was funny because the guy drinks a lot. He drinks a lot. F**k yeah, he probably even likes to drink gasoline. Bro he would call our private jet, completely drunk, talking s**t. F**k It was so funny. He’s a good person because he does understand the other side, he understands the other person. But he’s a guy with vision.” (h/t via combatalk)

Conor McGregor and Jose Aldo were fierce rivals during the rise of The Notorious One. Conor had a lot of harsh things to say about Aldo and his family. But since the fight, they have buried the hatchet. The former UFC double champ has previously stated that Aldo was a great champ and congratulated him on his retirement.

December 12th of 2015 was a significant date for Conor McGregor and Jose Aldo. On that day, Conor knocked out Jose within 13 seconds to become the undisputed UFC featherweight champ. However, many fans and pundits called the result a fluke as Conor’s first punch KO’ed Aldo. So what does Jose think about it? According to The King of Rio, Conor was the rightful winner.

“It was his merit, I was going in, like it or not, he has more reach than me. He had thrown a 1, 2 already that I dodged very quick and I answered very quick and he got spooked. I said, ‘now it’s the time to go in.’ Mike Tyson style brother. When I went in, straight away, everything was spinning. I was like, ‘f**k.'”

The amount of abuse Jose took from Conor, was enough to break any fighter. Even the greatest featherweight champ was not immune to the mind games. McGregor made Aldo so angry that he rushed in without caution. And that was enough for Conor to catch him and put his lights out in seconds. So the regret in Aldo’s voice seemed genuine.

Although there were chances of the rematch taking place in the years that followed, it never came to fruition. While McGregor went to have blockbuster fights, against the likes of Nate Diaz, Khabib Nurmagomedov and Floyd Mayweather, Jose gradually declined. However, Jose certainly wanted the fight. He was extremely motivated to get the rematch. But alas! It was not meant to be.

Now that Jose is retired, it seems like fans will never get to witness what may have happened in a rematch. But not just Aldo, even Conor McGregor seems to have walked away from combat sports. According to reports, McGregor has not been tested by USADA in 2022, which implies that Conor is indeed retired.