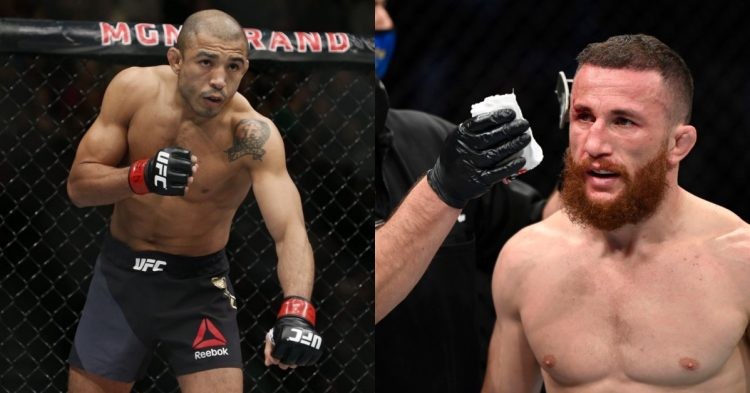 Will Merab Dvalishvili prove to be too much for Jose Aldo at UFC 278? (Images via Twitter)

Jose Aldo and Merab Dvalishvili are in the talks to fight each other at UFC 278. Jose Aldo is currently the 3rd-ranked fighter in the bantamweight division. He is on a 3 fight win streak which includes victories over Marlon Vera, Pedro Munhoz and Rob Font.

According to MMA journalist Ariel Helwani, the UFC is looking to put the Brazilian fighter back in action once again. He stated that Jose is most likely to fight Merab Dvalishvili at UFC 278 on August 20th.

Dvalishvili is ranked 6th in the weight class, just outside the top 5. The card is also rumoured to feature the rematch between Dustin Poirier and Justin Gaethje.

Merab is currently on a 7 fight win streak and he knocked out Marlon Moraes at UFC 266 in his last outing. The 31-year-old is perhaps the most dangerous fighter in the division. Despite his lengthy win streak, Dvalishvili has not had the chance to enter the Top 5 just yet.

Hence the bout against Jose Aldo is a boon for his career. Not only will he get to fight one of the greatest fighters to ever grace the Octagon, but Merab will also finally get to showcase his skills against a high-ranked, elite opponent. Can he win against a veteran such as Jose Aldo? Let’s break down the fight to see who will be the favourite to win.

Will Merab Dvalishvili be the favourite over Jose Aldo at UFC 278?

A fight between Jose Aldo and Merab Dvalishvili is not a fight that will be on everyone’s priority list. However, it is going to be a very significant contest for the division. Amongst the fresh blood fighters at the top of the division, Aldo and TJ Dillashaw are the only fighters who are from a different era.

TJ just defeated Cory Sandhagen to maintain his elite status. Aldo will also have to face the same challenge against Merab Dvalishvili come August. Aldo is 35 and about to turn 36 in September of this year. Can he still go toe to Teo against a much younger fighter who has a point to prove? Let’s find out.

The most impressive part of Merab’s game is his cardio. He has a very unorthodox approach to fighting. His constant forward pressure takes a lot of energy, but it seems as if Merab simply just does not get tired! The Georgian fighter lands at an average of 4.26 shots per minute.

It is a very high output for any fighter. But that is not the most impressive stat about him, The Machine averages 7.30 takedowns per fight as well. Merab has a takedown accuracy of 48% and maintains a takedown defence of 78%.

He does not like to give his opponents even a minute of a breather. The constant threat of takedown and a flurry of punches in a regular interval make him a nightmare for his opponents.

Jose Aldo has had an excellent record against dominant wrestlers in the past. He holds wins over Chad Mendes, Frankie Edgar and Urijah Faber. All of them were considered among the best grapplers during their prime. However, Aldo has shown the tendency of getting tired in the later rounds of his fights recently.

Hence, it makes Merab a very tricky opponent to face for Aldo. Although he has an excellent takedown defence of 90%, it will certainly take its toll on Aldo’s stamina. With Merab being such a freak of nature, he will keep hunting for a takedown no matter what.

As a result, Aldo may be facing the prospect of a bad loss that sees him being utterly dominated on the mat. Something that hasn’t really happened very often in his illustrious career.