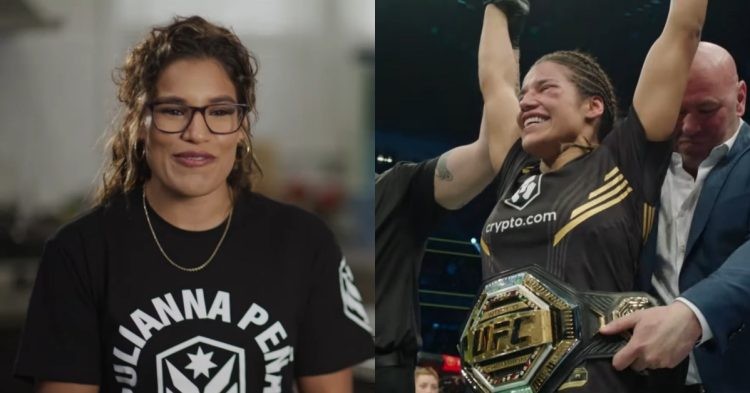 On December 11th of 2021, Julianna Pena caused what Joe Rogan labelled as the greatest upset in UFC history. In the second round of her women’s bantamweight title bout against Amanda Nunes at UFC 269, Pena submitted the consensus ‘greatest woman fighter of all time.’ Her life has not been the same ever since.

Pena was not a stranger to fame. She won The Ultimate fighter 18 by beating Jessica Rakoczy in the finale. However, that is nothing compared to what she is currently experiencing. Pena is now a UFC champion and being a UFC champ comes with a lot of media opportunities. Although some may dread it, Julianna Pena is more than happy to fulfil her media obligations.

The 32-year-old has been all over the country since getting her hands on the 135lbs title. From famous podcasts to news shows, Pena has relished the opportunity to be infront of the camera and spread her name. Pena is also a coach of the ongoing TUF season alongside Amanda Nunes. She commented on her fame in the countdown show for the upcoming UFC 277.

“I have had a lot of new opportunities since becoming a champion, it’s something that I wanted. I’ve gotten to go on the Joe Rogan podcast, Good Morning America, Barstool Sports.”

“It’s a great thing to be able to reach as many people as possible. That’s what I’m trying to do. I love hitting those media targets because I want more people from around the globe to know who I am and follow on my journey.”

Julianna Pena is taking full advantage of her media appearances. Before beating Amanda Nunes, a lot of the fan base did not know who she was or her story. But, as a UFC champ, she now has the opportunity to talk about her journey to reach where she currently is. On top of that, being in the public eye means that Pena is getting a lot more lucrative financial opportunities as well.

She has a big payday coming up as she is ready to defend her bantamweight belt against Amanda Nunes at UFC 277. Although she was reportedly paid $332,000 for her first fight against Nunes, the amount will be much bigger for the rematch. She will be a part of the main event of UFC 277 and with it, comes the privilege of getting PPV points.

Your official #UFC277 poster has arrived! 🏆🏆

But the rematch is not something that will be an easy fight for Pena. Nunes is considered the GOAT for a reason. She is the favourite to get the belt back in the rematch. However, Amanda was the favourite last time as well. But Pena got the job done in the end.

The Venezuelan Vixen will be hoping for the same to happen this time as well. If she does end up beating Nunes for the second time, Pena may get the chance to fight Valentina Shevchenko next.