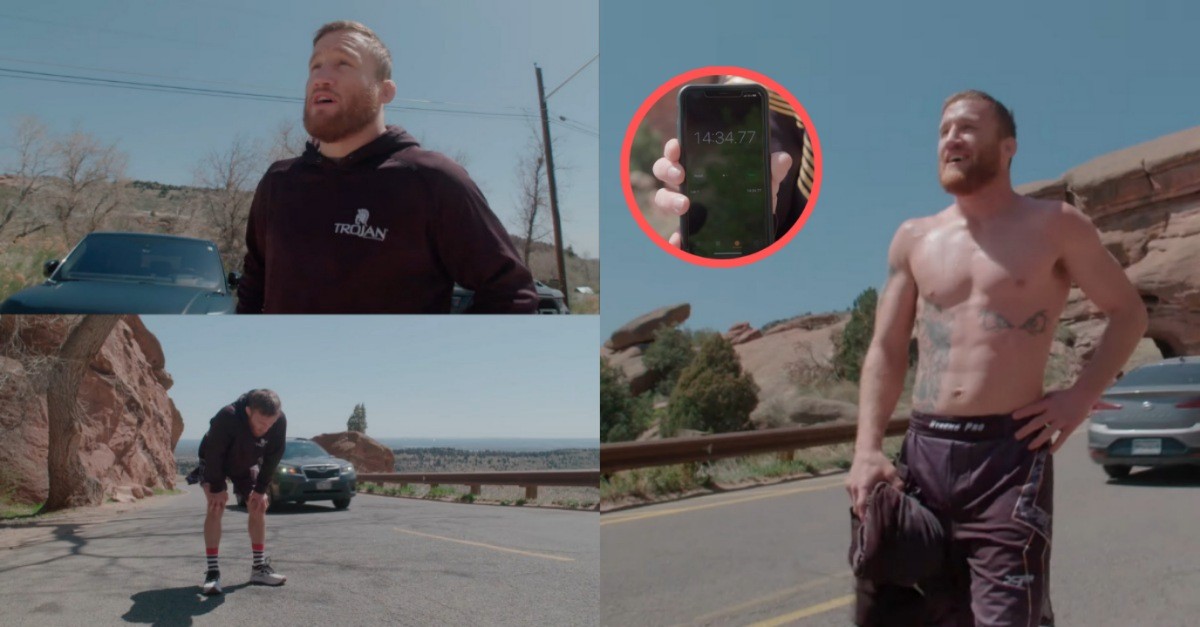 Justin Gaethje breaks his own record. (via UFC YouTube Channel)

Justin Gaethje beats his own personal record ahead of UFC 274! Stamina and endurance are the bread and butter for combat sports athletes as they always put their bodies on the line. Nobody embodies it better than Justin Gaethje with his hyper-violent style of fighting.

Later this weekend, The Highlight will face the current king of the Lightweight division, Charles Oliveira. His mastery of Brazilian Jiu-Jitsu is common knowledge these days in the MMA community. But, Oliveira’s striking has also improved a lot since the early days of his career.

But perhaps, the biggest strength that the champ possesses which goes unnoticed by everyone, is his endurance. As the fans saw during his last outing at UFC 269, Dustin Poirier dominated him throughout the entirety of 1st round. But as the fight progressed, the Brazilian found his groove and finished the fight in the 3rd round. Hence, Gaethje will have his hands full on May 7th.

In the first UFC embedded episode for the upcoming event, Justin Gaethje was seen focusing on his cardio and endurance. During the process, he broke the record of his personal best run time of 15 minutes and 8 seconds.

As a tradition, coach Trevor Wittman always makes Justin run on the hill of Red Rocks Park in Colorado. In the video he said, it helps to build up the stamina; so that Gaethje has no risk of getting injured in the later rounds of the fight. Although the 33-year-old did not enjoy running, he finished it within 14 minutes and 34 seconds.

However, it does not seem like the former Interim Lightweight Champion is in any mood to have a long and drawn out bout against the current champ. He is looking for an early knockout against Charles Oliveira. Gaethje said,

“Trying to get knockouts, that’s the quickest way out of the Octagon. I get paid by fights, not by minutes. So the quicker I can get out of there, the safer I should be. He got dropped versus chandler, he got dropped versus Poirier. Once I create that damage, I’m gonna continue to be methodical, patient and dangerous the whole time.”

Justin Gaethje clearly seems to be in the best shape of his life. He is also very determined to get the job done on Saturday. Can he finally get a hold of the championship after failing once previously against Khabib Nurmagomedov? Fans will find out the answer this weekend at UFC 274.