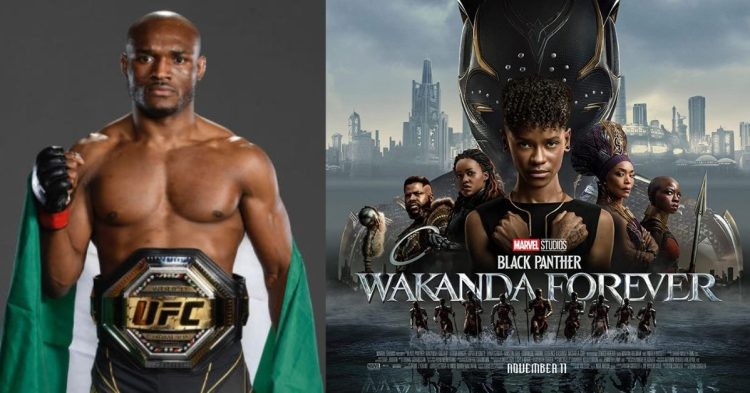 Kamaru Usman will make his Hollywood debut in the upcoming film Marvel’s Black Panther: Wakanda Forever. Ahead of his last fight with Leon Edwards at UFC 278, Usman announced that he will be starring in this movie.

In a recent interview, Usman discussed the “emotional journey” and the lasting effect that Chadwick Boseman had on the actors and crews following his tragic death. He said that it was very difficult for some cast members to work on the set of this movie without Boseman’s presence. Usman said:

“It was an emotional journey for all those actors and actresses that were there on set because, and I wasn’t around for the first movie, but being a part of the second one you got to see how much he meant to the movie and how much he actually had his hands in the making of the movie.”

Boseman gained huge popularity after appearing as the lead actor in the first franchise of the movie. Black Panther is also considered one of the best movies made by Marvel. After quietly battling colon cancer, Chadwick sadly died in the middle of 2020 which was a huge blow to the fans and co-stars of the MCU.

“It was very emotional. I mean shooting some of the scenes, there were some tough days on set with some of the actors and actresses because they were so connected to him and everything that he meant to that franchise,” Usman added.

Boseman played the lead role as T’Challa in the first Black Panther movie which was released in 2018. The Academy Award winner was diagnosed with colon cancer back in 2016. However, he never made this terrible news public and continued to work.

The second installment of the Black Panther movie is set to release worldwide on 11th November, this year. It is also one of the most anticipated movies of this year, given the involvement of Boseman in the first film. Boseman also played as T’Challa in Marvel’s Captain America: Civil War, but he is mostly recognized for his part in the original Black Panther.

The UFC star Usman will play a role in this movie but the character is undisclosed. Black Panther 2 will pay homage to the late actor, Boseman, and the amazing work and legacy that he left behind.

Kamaru Usman has vowed to bounce back from the brutal knockout defeat he suffered at the hands of Leon Edwards. This was the first-ever loss in Usman’s UFC career which also dropped him from the pound-for-pound No.1 rank.

‘The Nigerian Nightmare’ was brutally knocked out with a sneaky head kick by Leon Edwards in the last minute of the final round of their title fight at UFC 278. This defeat cost Usman his 19-fight win streak and the P4P No.1 rank apart from the welterweight title.

Usman recently revealed that he hopes to re-claim the welterweight title in early 2023. He wishes to fight Edwards in Wembley Stadium, England for the trilogy bout. Usman said:

“I’ll go grab that back probably top of next year, I think we’ll make that happen. Of course, like I said that night after it happened, I would love to go to England and do this in England.”

The former welterweight champ believes that he has more fans in England than Edwards. He also added that a lot of Jamaican and African fans will support him over England’s own ‘Rocky’.

UFC President Dana White and the current champ Edwards also stated that they want to make the trilogy happen in England. The much-anticipated trilogy bout is expected to take place as the main event of the promotion’s first PPV event in England.