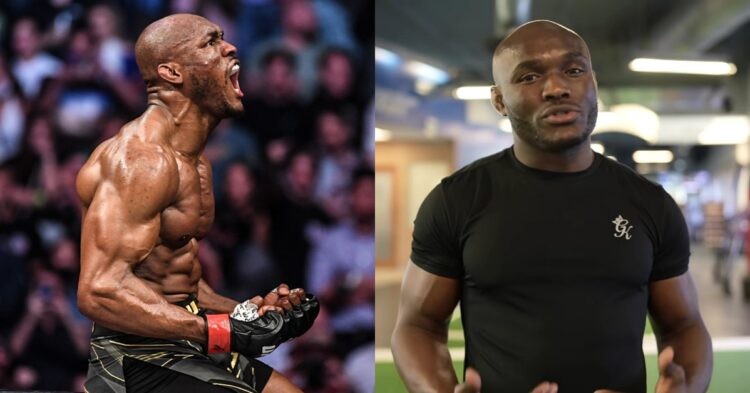 UFC Welterweight champion Kamaru Usman recently spoke to Men’s Health regarding his fitness routine. The champ gave a detailed look into his gym life, the kinds of work out he does and the diet he maintains to stay fit. He also took some shots at Conor McGregor during the interview as well.

Kamaru Usman became the 170lbs champion in 2019 after demolishing Tyron Woodley at UFC 235. Since then, he has truly become one of the most publicly admired fighters in the promotion. The Nigerian Nightmare is also one of the most attractive fighters to look at due to his chiselled muscles and greek god-like physique. He has always maintained a great level of fitness and during the recent interview, he revealed the secrets to his great shape.

Kamaru Usman revealed that rigorous workouts on a daily basis during his fight camps are a must for him. Even when he does not have any fights lined up, Usman works out 2-3 times weekly. But he also stated that he does not burn himself out on the training grounds anymore. Instead, the 35-year-old does strategic training which helps him in the long run to maintain his physical strength.

He was asked about his signature move during the interview as well. Usman jokingly suggested that he has replaced George St-Pierre as the fighter who uses the jab efficiently. But the champ also stayed true to his grappling roots and named wrestling skills as his signature move.

As for his favourite kind of workout, Usman once again stated a hard wrestling practice session is his forte. He mentioned a special type of strength and condition workout named plate pinchers. Kamaru Usman also spoke on the current diet that he is on. The Florida based fighter revealed that he has cut down on meat and consumes fish for more protein.

Usman also spilt the beans on what his menu is for the fight day. He said that he eats omelette, spinach and avocado as breakfast for fight day. The no. 1 pound for pound UFC fighter also eats red sauce pasta as the last meal before stepping inside the Octagon.

When asked about how a UFC champ like him prepares himself in the training ground, Usman revealed that a UFC champion has to train for every fighter in the division as any of them can get a title shot. Hence, he has to be prepared for all possible opponents. At that point, the interviewer asked whether he needs any special training to beat Conor McGregor or not. Usman replied,

“You should be asking Conor McGregor what kind of training it would take him to fight me! (Conor is) just looking for someone to fight that would make him relevant again. So yeah.”

Usman is currently recovering from a hand surgery that he went through earlier this year. But he already has his next opponent lined up as the UFC confirmed that Leon Edwards will challenge Usman for the belt next. However, it is yet unknown when the contest may take place.