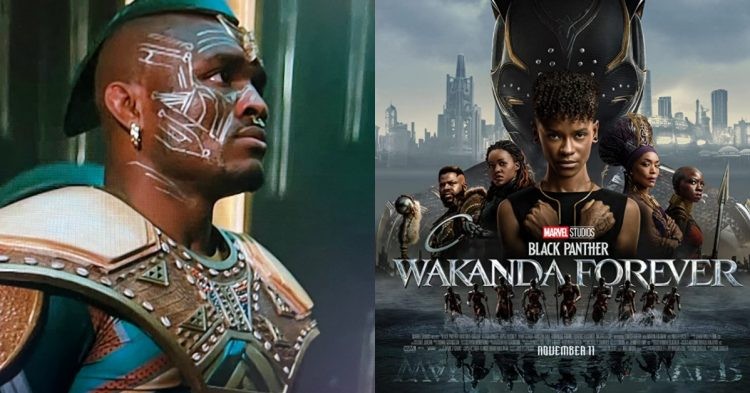 Former UFC welterweight champion Kamaru Usman just made his big Hollywood debut. He had a small part in the recently released Black Panther: Wakanda Forever. The movie was released on November 11th and it had a bumper opening. Although it did not cross the much-coveted $200 million at the box office on its opening weekend, it still broke the record for the largest opening in the month of November.

As far as 2022 goes, it had the second-biggest opening of the year behind Doctor Strange in the Multiverse of Madness. The movie opened to an insane $187.4 million. In terms of the Marvel Cinematic Universe, the Black Panther sequel also holds the record for the 7th largest opening in the franchise’s history. So it does look like the Kamaru Usman starring movie is doing quite alright at the box office.

Black Panther: Wakanda Forever is expected to cross $1 Billion at the box office

Kamaru Usman promoted the movie at the recently concluded UFC 281 PPV as well. Usman showed up in black attire to support his friend Israel Adesanya at the event. During the broadcast, UFC played a clip of Usman’s cameo in the movie. He is reportedly playing the role of a Wakandan naval officer. He was in attendance with Lupita Nyong’o.

Wakanda royalty in the house!

Aside from the massive domestic opening, Black Panther 2 earned $330 million at the worldwide box office on its opening weekend. Currently, the total worldwide collection stands at $342,791,109. The movie earned $192,465,260 at the domestic box office and $150,325,849 at the international box office, as per Box Office Mojo.

The first movie earned a total of $1.38 Billion at the box office. The film earned $700,426,566 at the domestic box office and $681,822,260 internationally. On its opening weekend, the movie earned over $370 million worldwide. Although the sequel earned slightly less, it is still on track to clear the $1 Billion mark with ease.

There were major doubts about the future of the Black Panther franchise. Chadwick Boseman, the actor who played T’Challa/Black Panther, tragically passed away of cancer at the age of 43 in 2020.

The news came as a shock to the fans as Boseman never publicly spoke about his struggles with cancer. Hence, it was an emotional experience on the set as the actors missed Chadwick’s presence. Usman revealed his experience after filming the movie.

“It was an emotional journey for all those actors and actresses that were there on set because, and I wasn’t around for the first movie, but being a part of the second one you got to see how much he meant to the movie and how much he actually had his hands in the making of the movie.”

At the UFC 281 post-fight press conference, Israel Adesanya also referenced Chadwick Boseman to reveal that fans should never jump to conclusions on any matter without inside knowledge.

As for Usman’s future in the UFC, he recently returned to training in the gym. Kamaru is preparing for an immediate rematch against Leon Edwards in 2023. The Nigerian Nightmare lost his 170lbs title against Leon at UFC 278. With both Leon and Kamaru winning one fight each, UFC fans are excited to see the trilogy. It looks like the bout will take place in the UK.