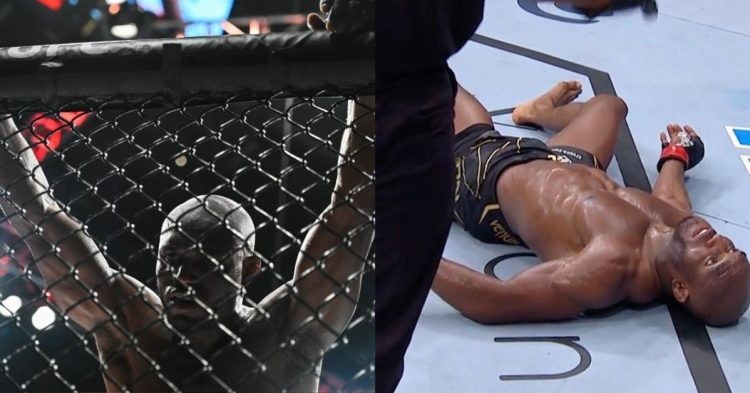 Kamaru Usman was knocked out cold at UFC 278 (Credit: UFC)

Kamaru Usman, the former welterweight kingpin and pound-for-pound No.1 has been dethroned by Leon Edwards at UFC 278. Usman was brutally knocked out by a head kick in the final round. But he has vowed to come back “with vengeance” after losing his belt.

‘The Nigerian Nightmare’ was almost successful in defending his title for the sixth time until he was caught with a surprising head kick that rendered him unconscious. Edwards seemed to be losing via points but somehow managed to set up the perfect kick that cost Usman his title and the first-ever loss in the UFC.

The former champ was rushed straight to hospital after the knockout loss, but now he seems to be in a better state and has made a tweet with captions:

“Champs f*** up sometimes… but we bounce back and come with vengeance.”

Champs f$ck up sometimes… but we bounce back and come with vengeance!! 👊🏿🌍🤴🏿 #NGHTMR

Kamaru had an unblemished record with wins over top contenders like Jorge Masvidal(x2), Colby Covington(x2), and Gilbert Burns. However, UFC President Dana White has confirmed that Edwards will defend his belt against Usman in his next fight. So we might see Usman retaining his belt in their trilogy fight.

Kamaru Usman suffered his first-ever UFC defeat in a shocking fashion with one of the most stunning knockouts in UFC history at the main event of UFC 278.

Usman would’ve tied his record with Anderson Silva if he won his last fight against Edwards. The former welterweight champ dominated the late rounds and was on course for a decision victory over his opponent.

But the Englishman saw a perfect opportunity and stole the show with a spectacular knockout to earn the UFC welterweight title. Edwards was riding a 10-fight unbeaten streak entering UFC 278 and was a massive underdog against the former pound-for-pound No.1.

However, there was no bad blood between the two contenders. And while Usman did not appear for the post-fight press, he did not shy away from congratulating the new welterweight champion. Usman reacted to his loss on Twitter, where he seemed to accept his defeat.

“Damn I love this sport!!! Things happen but… Alhamdulillah we move!! Congratulations @Leon_edwardsmma”.

Damn I love this sport!!! Things happen but… Alhamdulillah we move!! 👊🏿🌍🤴🏿 congratulations @Leon_edwardsmma

Kamaru was handed the second defeat in his professional career and the very first loss in the UFC. This fight broke his win streak but hopefully, he will bounce back stronger. It also seems like Usman won’t have to wait long to enact his revenge on the Englishman. That is because UFC President Dana White has stated that Usman will get the very first chance for the title shot against Edwards.