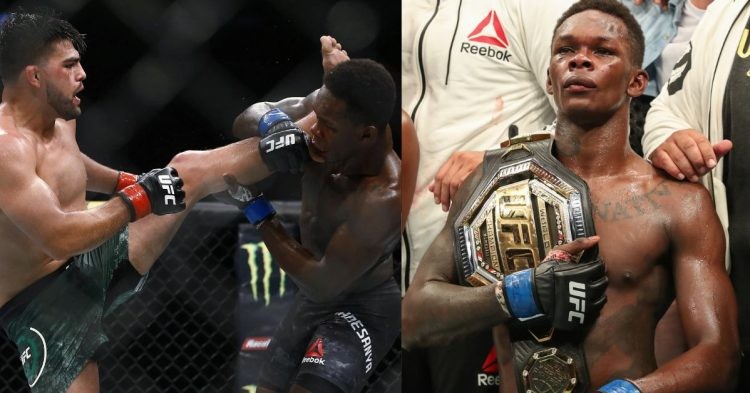 Israel Adesanya in a recent interview with The Pivot Podcast said how Kelvin Gastelum rocked him in the first round. On 13 April 2019, Adesanya faced Kelvin Gastelum at UFC 236 for the interim UFC Middleweight Championship as the co-main event. Adesanya proving himself as one of the best middleweight champions in UFC history says it was the first time ever he got rocked by a fighter in the octagon.

“The one I can think of in MMA, Gastelum. In the first round when he rocked me and I bounced off the cage and took the center. That one, I just remembered to take the center and keep attacking. In the Gastelum fight, later on, it was instinct and just drills, good technique.”….Adesanya said on his YouTube channel.

Adesanya has several times praised Kelvin Gastelum. The Last Stylebender says the Gastelum fight was the biggest challenge he ever faced in the cage. It was the only time Adesanya took serious damage with bruises and cuts on his face. It was enough to show how the champion suffered from Gastelum.

Nevertheless, in the fourth round, Gastelum caught Adesanya off guard and nearly knocked him out with a head kick. But In round five, “The Last Stylebender” made a strong comeback, stunning Gastelum numerous times and attempting to finish him off till the round ended.

Who has knocked out Israel Adesanya?

Israel Adesanya has always been that fighter who plays on the safe side and is careful to not get knocked down by simple mistakes. With his reach advantage, the champion always keeps his distance from his opponents. But regardless Adesanya has been knocked out one time in his fight career as a kickboxer. In 2017 Adesanya was knocked out cold by the Glory kickboxing middleweight champion Alex Pereira by a vicious left hook.

With three more days to go to UFC 281, Israel Adesanya is again facing his kickboxing rival, Alex Pereira. Being the biggest middleweight fight of the year fight fans are eager to see if the Last Stylebender can get his revenge.