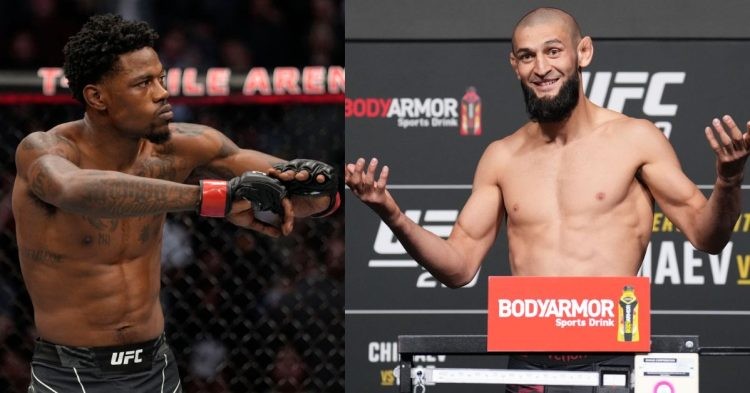 Kevin Holland is again thinking of hanging up the gloves after his upcoming bout against Stephen Thompson at UFC Orlando this weekend. Holland already retired once this year after his humiliating loss at the hands of Khamzat Chimaev at UFC 279, but now after believing the UFC is favoring Chimaev he has stated that he will retire again.

Chimaev was originally scheduled to fight Nate Diaz in the main event of UFC 279. However, after ‘Borz’ missed weight, the whole main card was reshuffled and Holland stepped up to fight Chimaev on short notice. Moreover, leading up to the fight fans saw a huge drama as a backstage brawl broke out which involved Team Diaz, Chimaev, and Holland.

In the pre-fight press conference, Holland voiced his displeasure and believes there is favoritism in the promotion. Holland said: “Honestly, right now, I don’t know what the f*ck I’m looking for. I’m just looking to finish getting paid and see what happens next.”

“It was serious as hell. Super serious, and it’s still on the table. If I wake up Sunday morning after beating Wonderboy, and you guys have Chimaev fighting for 185-pound world title when he’s never won a fight at 85 at a top 15 I’ll retire. I understand business is business, but favoritism is favoritism,” Holland added.

Holland got enraged as Chimaev was not fined for missing weight at UFC 279. Instead, he is potentially getting a title shot against the current middleweight champion Alex Pereira.

Why did Kevin Holland retire from UFC after Khamzat Chimaev fight at UFC 279?

Kevin Holland always wanted to fight a good striker like Thompson instead he had to face a dominant grappler in Khamzat Chimaev at UFC 279. The Chechen dominated ‘Trailblazer’ throughout the fight and choked him out in the very first round.

Shortly after the bout, Holland announced his retirement on Instagram. ‘Trailblazer’ also stated that he got a massive payment to fight Chimaev on short notice. He even said that he had enough money to live a good retirement life.

Prior to the bout the heated physical altercation and trash-talk with Chimaev put a chip on Holland’s shoulder. So it makes sense why Holland became so upset after the defeat. However, the retirement was proven to be short-lived as Holland got what he wanted and is now set to fight Thompson.

Still, Holland intends to announce retirement again after his upcoming bout. The reason is his issue with Chimaev getting a title shot at 185 lbs. Holland said that despite missing the weight and causing havoc at UFC 279, Chimaev is getting a chance at middleweight gold whereas he has no chance of getting a title shot. According to Holland, this is because Chimaev is favored in the UFC.