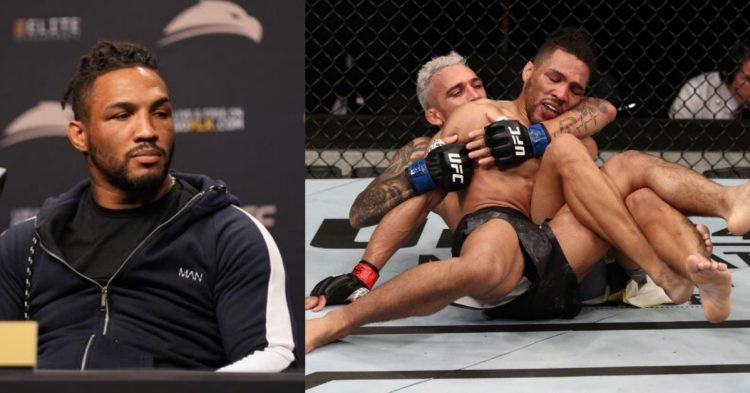 Charles Oliveira is currently the underdog heading into UFC 280. He will fight Islam Makhachev in the main event of the PPV for the vacant lightweight belt. Fans are counting out Oliveira as they think Islam Makhachev will dominate him with his Dagestani style of wrestling. However, Kevin Lee believes counting out the former champ is not the right idea.

Kevin Lee went up against Charles Oliveira in 2020 and lost via guillotine choke in the third round. Hence Lee knows how potent Do Bronx really is on the ground. Recently, he took to Instagram to break down the fight between Charles and Islam and made his prediction on the outcome. Although the former UFC lightweight fighter did not pick a winner, he issued a warning to Islam Makhachev.

“Lots of people are asking my opinion about the fight this weekend I’m not gonna make a prediction on who will win but will say this; the grappling in the fight will make the biggest difference. The Russian fighters are so dominate in grappling in mma vs Americans because of the use of their legs.”

“I have spent years learning and mimicking the style. Do Bronx is the only guy that I have fought who really understood how to use his legs and entanglements to change positions. This video is from our first exchange, it cost me everything and I’m still healing my knee from it 2 years later. Whoever wins the grappling will win the fight.” (h/t via @motownphenom)

Following his loss to Charles Oliveira, Lee was defeated by Daniel Rodriguez and ultimately got cut from the promotion. He is currently under contract with Eagle FC, owned by Islam’s cousin Khabib Nurmagomedov. He fights at a weight class of 165lbs and defeated UFC legend, Diego Sanchez, on his promotional debut at Eagle FC 46 in March earlier this year.

Charles Oliveira had the opportunity to headline a card in his home country of Brazil against Kevin Lee on March 14th, 2020. At the time, Oliveira was on a 6-fight win streak and was looking to make a move to the top of the division. However, the event occurred behind closed doors as the COVID-19 pandemic was taking over the world.

The UFC fans missed out on witnessing Oliveira’s greatness as he finished Kevin Lee in a spectacular fashion. At the 0:28 minute mark of the third round, Oliveira jumped on Lee and caught him with a guillotine choke. Although the finish was certainly fantastic, it is Oliveira’s groundwork prior to that, which Lee has pointed out.

Elite Dagestani wrestlers are amazing at getting a hold of the legs of their opponents and controlling them against the fence. Often in Khabib’s fights, he used to tuck his opponent’s legs between his legs on the ground as he sat up and controlled them against the fence. However, Lee pointed to Oliveira’s leg entanglement during their fight to prove Oliveira can counter the Dagestani style of wrestling.

Lee had a ground control time of 6:30 minutes against Oliveira and landed 2 successful takedowns. Although Charles spent a lot of time on his back, he made sure to keep a hold of Lee’s legs.

The 30-year-old revealed that Charles did a lot of damage to his knees, which, he is dealing with to this day. It should work as a cautionary tale for Islam if he thinks wrestling alone is enough for him to beat Oliveira.