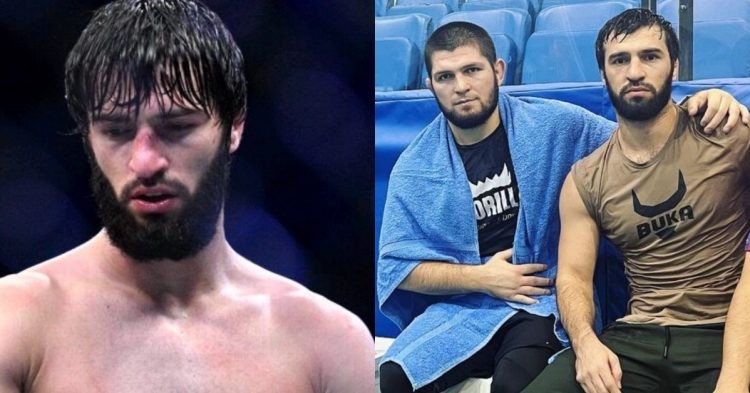 Zubaira Tukhugov was scheduled to fight Lucas Almeida in the preliminary card of UFC 280. However, the UFC earlier announced that the Russian fighter will not be fighting on the card and described the reasoning as “weight management issues.”

This particular event has been riddled with cancelled fights. Zubaira now joins Shamil Abdurakhimov, Magomed Mustafaev and Marina Rodriguez whose fights have also been cancelled from the event. As for the upcoming PPV, every fighter on the card made weight except Katlyn Chookagian, who weighed in at 127.5lbs for her flyweight fight. She missed the weight by 1.5lbs.

Following Charles Oliveira‘s weight miss in his previous fight against Justin Gaethje at UFC 274, there was a lot of interest surrounding the weigh-in event. Fans would be happy to know that both main-event fighters made weight as Makhachev came in at 154.5lbs and Oliveira also weighed in at 154.5lbs. For the co-main event, both Aljamain Sterling and TJ Dillashaw came in at 135lbs.

The other major fight on the card is between Petr Yan and Sean O’Malley. The former champ weighed in at the bantamweight limit of 136lbs, while O’Malley took to the scales at the weight of 135.5lbs.

Zubaira Tukhugov is a teammate of Khabib Nurmagomedov and Islam Makhachev. Hence he had the opportunity to make an impression on a PPV card which features some of his closest allies in the main event. However, this is not the first time Tukhugov has had difficulties making weight. The featherweight fighter missed weight in his fight against Hakeem Dawodu at UFC 253.

The 31-year-old joined the UFC in 2015 and beat Douglas Silva de Andrade on his debut. However, his UFC run has been filled with injuries and controversies. In June 2015, Tukhugov pulled out of a fight against Thiago Tavares due to an injury. He also had to withdraw from his fight against Ricardo Ramos in March 2021 for the same reason. But he went on to fight Ramos in October of the same year.

Since September 2020, Zubaira only had one fight in almost two years. But not only injuries and weight cutting, but Tukhugov was also pulled out of his fight against Tiago Trator by UFC as he failed a drug test, for which he served a 2-year suspension. He was also involved in the UFC 229 brawl which saw Team Khabib and Team Conor McGregor going at it after the event.

After the incident, Zubaira, along with Abubakar Nurmagomedov was fined $25,000 and was suspended for 1 year. Although UFC President Dana White stated that UFC would release them, Khabib Nurmagomedov‘s threat to quit the UFC ultimately ended up saving them.

“Charles, You Better…” – Paul Felder, Last Fighter to Beat Charles Oliveira Sends an Ominous Warning to “Do Bronx” Ahead of UFC 280