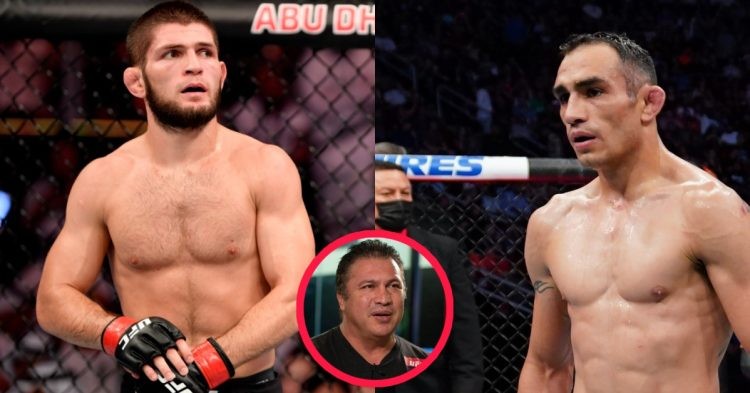 Khabib Nurmagomedov vs Tony Ferguson is one of those dream fights that just never took place. Although there were several efforts to make the fight happen, due to unfortunate circumstances, it never came to pass. However, the fans saw a glimmer of hope recently after both Khabib and Tony seemingly agreed to coach a season of The Ultimate Fighter.

Although Tony originally pitched the idea, it seemed to really catch the attention of Khabib Nurmagomedov. However, Khabib made it clear that he is not willing to fight Ferguson. Instead, he wants to have a friendly rivalry with Tony. Nurmagomedov wants to coach Tony’s rival team in an upcoming season of TUF.

Nurmagomedov’s coach Javier Mendez recently spoke to Submission Radio and provided an update about the likelihood of Khabib vs Tony actually happening. During the interview, Mendez stated that Khabib is really pumped about the idea. He revealed that The Eagle even wanted to have a face-to-face discussion with UFC President Dana White, to discuss the plan.

By the sounds of it, it looks like coach Mendez is very much interested in watching the program taking place. However, he is not alone. Even Dana White sounded intrigued by the idea of having Nurmagomedov and Ferguson coach a season of TUF.

The very first season of The Ultimate Fighter took place in 2005. The inaugural season was coached by Randy Couture and Chuck Liddell. In the finale, Stephan Bonnar and Forrest Griffin tore the house down. In a sense, they also saved the UFC from going out of business. As a result, the show holds a particularly special place in Dana White’s heart.

But the show has lost its lustre significantly since its initial days. Things became so bad that the company did not even renew the show for almost 3 years after 2018’s The Ultimate Fighter: Heavy Hitters. However, the show made a return in 2021 with the UFC Featherweight Champion Alexander Volkanovksi and Brian Ortega as the coaches.

Currently, the women’s bantamweight champion Julianna Pena and the female GOAT Amanda Nunes are coaching the ongoing season. But it will not be controversial to say that the recent two seasons have once again failed to capture the audiences. As a result, it needs the presence of some big stars.

Who is better to turn around the ratings than Khabib Nurmagomedov? Although Khabib is retired and has not fought since 2020, he remains one of the biggest attractions in the sport. He may have become a promoter with his own fighting promotion, EAGLE FC, Khabib is still very fit and in tune with the sport.

Hence, featuring him on TUF will give the show a much-needed boost. The fans will also hope that being a part of the show will re-ignite Khabib’s inner fighting spirit and make him come back for one last fight.