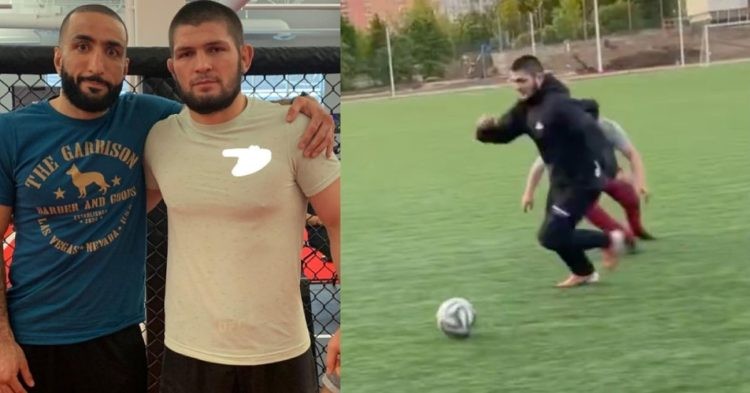 Belal Muhammad will take on rising star Sean Brady at UFC 280. In what is likely to be his toughest fight in the UFC yet, Belal believes that training and learning from the best will win him the fight.

Ever since his retirement in 2020, Khabib Nurmagomedov has given himself to coaching young fighters. As such, The Eagle has become renowned for his coaching prowess, after great success with fighters like Islam Makhachev and Usman Nurmagomedov. Now, his team is a little bigger with Belal also included in the fold.

Speaking to the media, Belal recalls a game of football (soccer) with Khabib and the rest of the guys. “They take it so serious like literally, my team was down. I was on Khabib’s team in the first game and we were down like 4-1, and he’s snapping on me like do something! In the second half, he went off, he scored like 5 goals. I realized, man, Khabib is a monster and his competitiveness is different. He’s so good and he wants to win everything.”

Belal has been very vocal about the welcome and the support that he has received from Khabib and his team. Surrounded by fellow Muslims, ‘Remember The Name’ feels that he is becoming a better fighter whilst feeling closer to God.

Muhammad has been preparing for his fight against Brady with Nurmagomedov and his team in Dubai. Khabib is simultaneously helping prep Islam Makhachev for his vacant lightweight title fight against Charles Oliveira in the night’s main event.

How has training with Khabib improved Belal Muhammad?

Belal is currently on his best run in the UFC. ‘Remember the Name’ is on an eight-fight undefeated streak with seven wins and one no-contest. During this time, the 34-year-old has beaten the likes of Stephen Thompson, Demian Maia, and Vicente Luque.

Belal will return to action at UFC 280 later this month and when he does so, he’ll be facing 15-0 prospect and rising star Sean Brady. Training with Khabib and his team, Belal previously revealed how every single day is difficult and every single spar is harder than the last as everyone regardless of weight class, gives it their all.

Muhammad feels that training with Khabib has improved his technique, and hopes that he can make a statement with his win over Brady. Will Belal beat Brady? And if he does, do you think he deserves the next title shot? Leave your thoughts in the comments below.