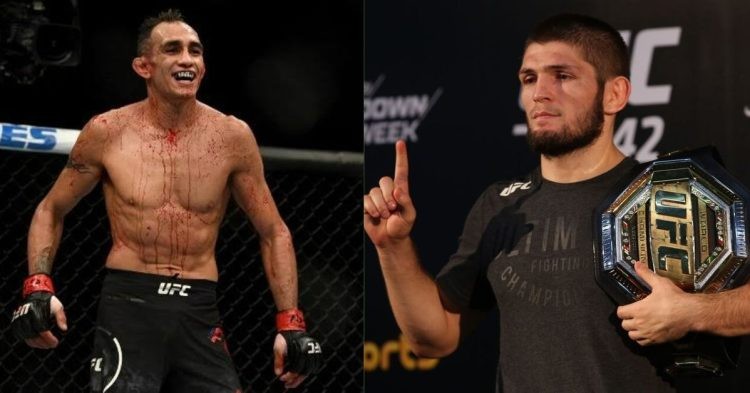 Khabib Nurmagomedov might have retired from competing but not talking about his competitors. He is usually seen giving his opinion on the current state of affairs in MMA. Primarily due to the passion he possesses for the sport.

Five fights between Nurmagomedov and Ferguson were scheduled, but none of them took place, therefore they were never able to settle their score. Ferguson is still willing to participate even if Nurmagomedov has subsequently retired and is no longer a major contender. However, Tony is still competing despite suffering many defeats.

In an interview, Khabib stated, “Not Khabib, not Tony, nobody. We had our time, and it passed. He continues to fight. He needs money. You have to pay your bills in the U.S., and I’m sure that since he’s a Californian, I know all the Californian fighters everything he earned, take half of that. I think he keeps fighting for money to pay bills, taxes. He has a family, I think he has two kids. “

This comment received immense backlash since it is challenging the passion and will of Tony’s character. Fedor Emelianenko’s sister also weighed in on the Situation. Here are few reactions upon the same.

Khabib is wrong in assuming that fighters who continue to fight past their prime fight only for money.

A lot of them aren’t willing to accept that they’re past their prime or can’t imagine themselves as anything other than professional fighter. https://t.co/vglEVgNDYj

One fan reacted upon this and stated, “True, especially for likes of Tony who were at the top, once upon a time. It is psychologically difficult to accept reality. Higher the highs, lower the lows as they say. It’s why all fighters need to be respected more regardless of fandoms, they put everything on the line.”

Khabib Nurmagomedov disrespecting UFC fighters in the past

Khabib’s long time training friend, Islam is set to face Charles Oliveira.  During the lead up of the bout, Khabib was being extremely critical of his performance. To the extent, that Oliveira found it to be extremely disrespectful and uncalled for. Most importantly, Khabib explicitly stated that Islam will “Ride him like a Horse”

Such a comment was criticised by fans all across the board but also by the fighter himself.  Charles in a response stated, “They’re being arrogant and that’s what will kill them. The arrogance from their manager, former fighters, their arrogance will kill them.”

He continued by cautioning everyone on the team not to say something they later regretted in the media. The main event of UFC 280 will be between Charles and Islam. If Makhchev wins, the belt will return to Dagestan after a two-year absence. Oliveira would become the second lightweight champion in UFC history if he prevails.