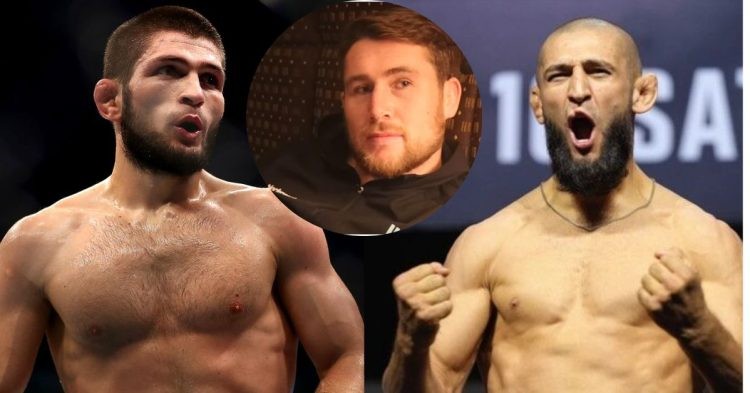 Darren Till on Khabib Nurmagomedov's comments about Khamzat Chimaev

UFC Middleweight Darren Till has addressed the criticism directed towards him and teammate Khamzat Chimaev after the UFC 279 incident, by former UFC lightweight champion Khabib Nurmagomedov.

Before UFC 279 event, Chimaev missed weight for his main event welterweight bout against Nate Diaz by 7.5 pounds. This in turn forced the UFC to create a new card for the main card fighters.

The Chechen was rescheduled to face Kevin Holland in a catchweight bout, while Nate faced Tony Ferguson in the main event. Chimaev defeated Holland via first-round submission and throughout the time he was booed. Khamzat also flipped off the booing crowd at the UFC 279 ceremonial weigh-ins.

Recently in a charity event, Khabib Nurmagomedov talked about this incident and went off on fellow Muslim UFC star Khamzat Chimaev. The Chechen was unapologetic after missing weight and for his disrespecting nature, Khabib stated that Chimaev isn’t surrounding himself with the right people. The former lightweight champ advised Khamzat to be around good Muslims who’ll guide him well.

Till in a recent interview questioned Nurmagomedov’s comments as ‘the Eagle’ himself has missed weight in the past. Till stated:

“We are not coming out now saying — What because I and Khamzat have a bit of fun on camera, being a bit wild; does that mean that I’m not good people or his coaches aren’t good people?”

Darren sounded upset about Khabib’s comments and could not understand why being a non-Muslim branded them as bad people.

Khabib Nurmagomedov Has a Long History of Weight-Cutting Issues

The former champion Khabib Nurmagomedov has a long history of missing weight and because of that, he had to pull out of some fights as well.

Because of Khabib’s issue with making weight, Darren Till touched upon his comments. Till stated:

“As much as I do respect Khabib as a person and a fighter, I just don’t respect him coming out with comments like that.”

In the same interview, Till also talked about the fact that Khabib also pointed his fingers at their Brazilian Jiu-Jitsu coach. Even though he’s not Muslim that doesn’t make him a bad person.

Khabib missed weight first time against Abel Trujillo in 2013, weighing in at 158.5 pounds for his lightweight bout. Reportedly, the Russian was hospitalized after a botched weight cut ahead of his scheduled matchup against Tony Ferguson in early 2017, a fight that never happened because of numerous issues.

In his final UFC fight against Justin Gaethje in October 2020, Khabib was part of a highly controversial weigh-in, where he struggled at the weigh-in. However, Khabib managed to cut weight and defeat Gaethje and remained the undefeated lightweight champ.