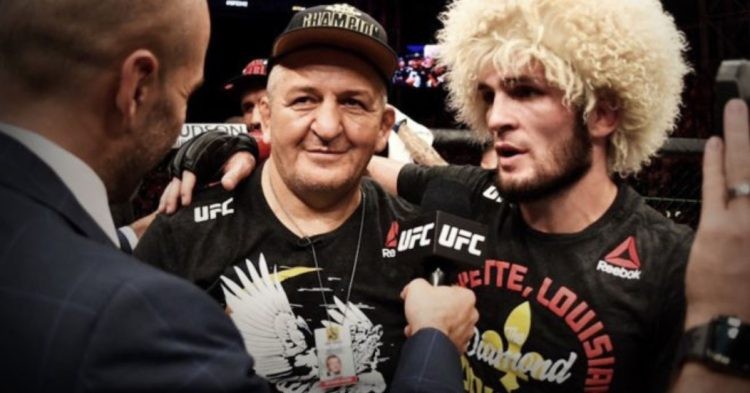 Khabib ‘The Eagle’ Nurmagomedov is considered to be one of the Greatest fighters to ever step inside the cage. Khabib surprisingly shocked the world by announcing his retirement after his third successful title defense against Justin Gaethje at UFC 254 back in 2020.

Many questioned his decision to retire at the young age of 32. Pointing to the death of his father Abdulmanap, Khabib declared that he would never step inside the ring again.

Khabib has an untarnished record of 29-0. There have been persistent speculations regarding him possibly fighting again one day, but considering the religious man Khabib is, it’s hard to imagine him breaking the promise he made to his mother to never fight again.

A recent picture that surfaced online which showed Khabib having a wallpaper of his father’s photo on his phone made UFC fans emotional. One user perfectly described their connection, writing “The man who taught the eagle how to fly” Abdulmanap was not just Khabib’s father but also his most important coach. His father was his trainer and guide throughout his professional fighting career.

Reflecting on his relationship with his father, Khabib once said “It was my father. He was with me all the time, you know. He gave me advice. He told me what I have to do, what I don’t have to do, you know. Like, he was my mentor, you know.”

How did Khabib Nurmagomedov’s Father die?

Khabib’s father Abdulmanap died at the age of 57 due to complications caused by Covid-19 on the third July of 2020. Abdulmanap was first hospitalized in Moscow in May 2020, with Covid-19 complications impacting his previously existing heart disease. After a two-month-long battle with the illness, Abdulmanap finally passed away after his condition worsened.

Khabib’s biggest rival Conor McGregor also offered his condolences, McGregor wrote on Twitter “The loss of a father, a coach, and a dedicated supporter of the sport, Condolences and rest in peace Abdulmanap Nurmagmedov”. Abdulmanap Nurmagomedov only cornered Khabib once during his son’s UFC stint. Abdulmanap was widely considered as the “Father of Dagestan MMA”