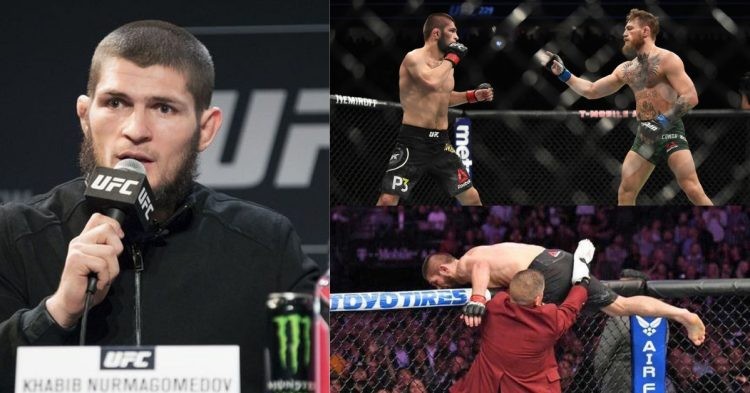 Khabib Nurmagomedov has undeniably cemented his legacy as one of the greatest MMA fighters in the history of the sport. With an undefeated record of 29-0 and three title defenses, the former lightweight champion retired at the top of his game.

To honor his achievements in Mixed Martial Arts, the UFC acknowledged his greatness by inducting him in the Hall of Fame. The former UFC champion was awarded with the prestigious jacket and trophy at the UFC HOF ceremony today. After being awarded, Khabib sat down with his American Kickboxing Academy teammate and fellow hall of fame inductee Daniel Cormier and Ryan Clark for an interview.

The Russian lightweight discussed several topics from his feeling after becoming a UFC hall of famer to previewing the upcoming UFC 276 fight card with DC&RC. While having a conversation, Cormier asked Khabib why he didn’t even speak about his battle against Conor McGregor in 2018 in his hall of fame speech.

Khabib revealed the reason why he didn’t mention the Irishman’s name during the entire ceremony speech. He said that he was tired of talking about that fight. But he confessed that his matchup with Conor was a career defining moment for him.

“This fight become bigger than our sport, bigger than MMA. Like all the time talking about this I don’t like but this is like one of the best moment ever happened in my professional career you know 2018, October 6th when I finish (Conor McGregor)this guy.”

Khabib Nurmagomedov joined his teammate Daniel Cormier and Ryan Clark for an ESPN MMA interview after the UFC’s Hall of Fame induction ceremony. RC started off the interview by asking Khabib about his feeling while going into the UFC Hall of Fame with his close friend DC.

Khabib said that it was a honor to share the stage with Cormier and explained that he went through mixed emotions throughout the day. “To be honest it was like very fun day. The same day it was very busy day, very emotional day you know to be inducted into the UFC Hall Of Fame with my brother DC you know like this is history this is legacy.”

It is iconic to see two teammates getting into the UFC Hall of Fame honours on the same day and they deserve to share this moment as they both have trained together for nearly ten years.