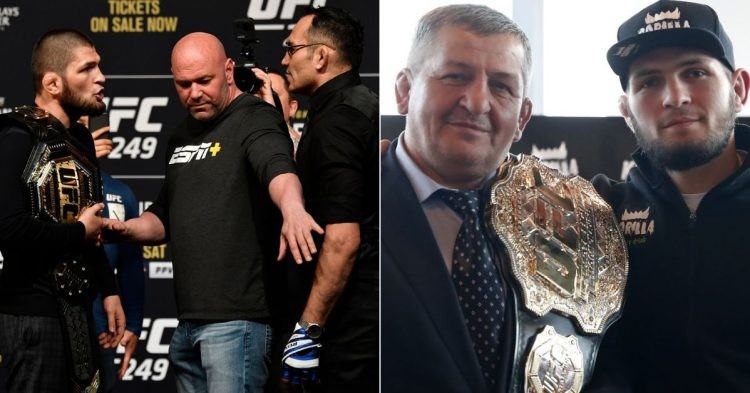 In a recent interaction with fans in Toronto, Khabib Nurmagomedov admitted that he always wanted to fight Tony Ferguson. “It was Tony Ferguson for sure. But this is never happened.” He said. Nurmagomedov and Ferguson were matched up on several occasions, the most recent being the undisputed lightweight title fight back at UFC 249.

Whatever happened is in the past. Heads up Tony, I hope everything is good with you and your family. When your son grow up, he’ll be proud with you. @TonyFergusonXT

Now, Khabib Nurmagomedov is retired and has made it clear that he doesn’t intend to step inside the Octagon again. Meanwhile, Tony Ferguson has been on a downward spiral ever since UFC 249, losing five fights in a row. Earlier, Nurmagomedov had accepted an invitation to coach in The Ultimate Fighter with Tony Ferguson. However, there has been no update regarding the same.

For the last three years Tony Ferguson you never won a single round in the @ufc some of the rounds you lost 10:8. Since 2015 you won only one fighter from top 15.
Tony, it’s a clear picture here, I’m not gonna go low and personal, not gonna insult you. It’s just a facts.

There have been reports that Khabib Nurmagomedov never wanted to fight Tony Ferguson in his prime. And it’s safe to say, now after 5 back to back defeats, a match-up between the two just doesn’t make sense.

Khabib Nurmagomedov wanted to fight Anthony Pettis in his prime

On an interesting note, Khabib Nurmagomedov revealed that he wanted to fight Anthony Pettis right around the time he defeated Benson Henderson for the UFC gold.

Eight years ago today I accomplished my dream of becoming a #UFC champion. I love this sport and am grateful for all the doors it’s opened for me. Thank you to everyone who’s been riding with me since day one 🙌🎢 pic.twitter.com/2ig8wDiYIf

“I think it was 2014-15 when Anthony Pettis was UFC Champion. It was Anthony Pettis. That time I really really wanna fight with this guy but then he lose his title with Rafael dos Anjos. After that, his career went down and he never come back.” Khabib revealed.

Pettis became the UFC Lightweight Champion back at UFC 164, and successfully defended his title against Gilbert Melendez at UFC 181. However, he dropped a unanimous decision loss against Rafael dos Anjos in his second title defense.

Adding to both these fighters, Nurmagomedov also added GSP to the list of fighters he wanted to face in his UFC career. However, the addition of Georges St-Pierre was just out of audience pressure. Khabib was in Toronto after all!