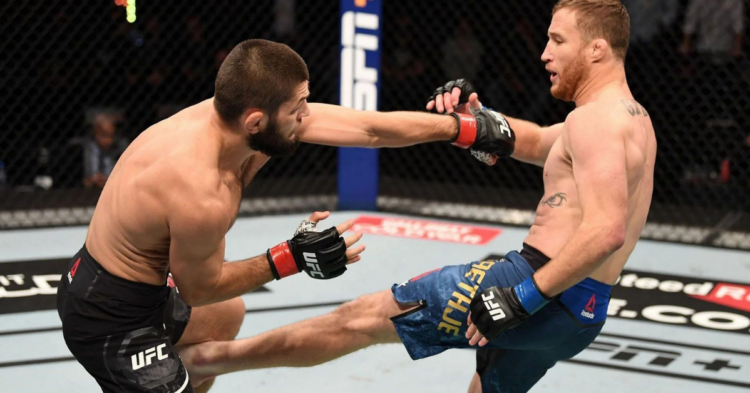 Khabib Nurmagomedov and Justin Gaethje will square up against each other in the main event of UFC 254 for the unification title bout for the UFC Lightweight Championship. Khabib Nurmagomedov will make his much-anticipated return to the UFC octagon, after an incredible submission win over Dustin Poirier at UFC 242. Justin Gaethje is coming off a spectacular victory over Tony Ferguson at UFC 249.

Khabib Nurmagomedov was initially scheduled to defend his lightweight gold against former interim champion Tony Ferguson. However, the bout fell apart after travel restrictions in light of the coronavirus made it impossible for Khabib Nurmagomedov to travel to the United States of America. Tony Ferguson and Justin Gaethje accepted the fight on quick notice for the interim Lightweight Championship. In what was the first UFC live event after the major outbreak of coronavirus, Gaethje put up an incredible display of boxing and completely dominated Tony Ferguson. He picked up a TKO victory in the fifth round to become the interim lightweight Champion.

Who has the edge in Khabib Nurmagomedov vs Justin Gaethje In a recent interaction, Khabib Nurmagomedov shared his thoughts on Justin Gaethje, Khabib revealed that he respects Justin Gaethje, and there’s no animosity between both the fighters in the lead up to their unification title bout at UFC 254.

“I’ve known Justin Gaethje for a while since he fought in WSOF, then PFL. I remember in 2016 when I was returning after I had three surgeries in a row. When Tony Ferguson got injured and I got Darrel Horcher on 9 days notice, Justin helped me cut weight. I had a tough weight cut. He helped me cut the last 2.5 kg before the weigh-ins.”

Khabib also revealed that Justin Gaethje helped him cut weight before his short-notice fight against Darrel Horcher. Both the fighters are managed by Dominance MMA and share a good relationship. Khabib Nurmagoemdov appreciated Gaethje’s performance soon after his win over Tony Ferguson, and both the fighters have remained cordial towards each other in the lead up to the fight. It will be Khabib Nurmagomedov’s third title defense, and a win over Gaethje will put him at the top of the lightweight division, and further cement his position as the lightweight GOAT.