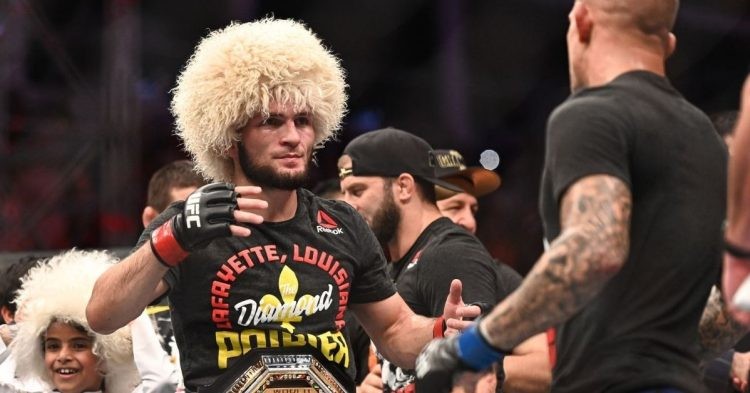 Khabib Nuramgomedov has dropped an intense promo ahead of his unification title showdown against Justin Gaethje at UFC 254. After failing to compete against Tony Ferguson back in April due to the coronavirus, Khabib Nurmagomedov will make his UFC return against the very dangerous Justin Gaethje. Ahead of the match-up, Khabib dropped an exciting promo on his official Instagram page.

WATCH: Kamaru Usman Struggles Against Michael Chandler on the Ground

Khabib Nurmagomedov can be seen donning the same old head gear that he has kept with himself ever since joining the American Kickboxong Academy. Khabib’s time in the AKA is pretty common online, and his friendship with Daniel Cormier is often the centre of the topic whenever he is asked about training. Earlier, Khabib revealed that he has been training to build his muscle, and has significanty improved his ground game since the last time we saw him inside the octagon.

Khabib’s last fight against Dustin Poirier at UFC 241 where the Dagestani fighter picked up an impressive sumission decision win in the third round of the fight. With the win, Khabib successfully managed to defend his title for the second time. Khabib will look to defend it for the third time against Justin Gaethje, who is coming off an impressive stoppage victory over Tony Ferguson at UFC 249.

Justin Gaethje has long been considered as the greatest threat to Khabib Nurmagomedov’s throne at the Lightweight division. He comes with the power that McGregor brought inside the octagon, and has impressive wrestling pedigree to go against someone like Khabib. Gaethje has looked in great shape and his recent performances inside the octago, most notably against former interim Champion Tony Ferguson are testimony of his greatness inside the UFC octagon.

“It’s very important to stay off the ground. I’m not trying to go in there and wrestle with Khabib. I don’t think I can beat him in a wrestling match because I haven’t focused on wrestling like that to win a wrestling match. I’ve constantly worked on my defense. That’s never gone away.” Gaethje said.

Justin Gaethje stated that he will look to avoid Khabib’s takedown and keep the fight on the feet against Khabib when they come face to face at UFC 254. After snapping Ferguson’s undefeated streak, Gaethje will look to upset Khabib Nurmagomedov come UFC 254.