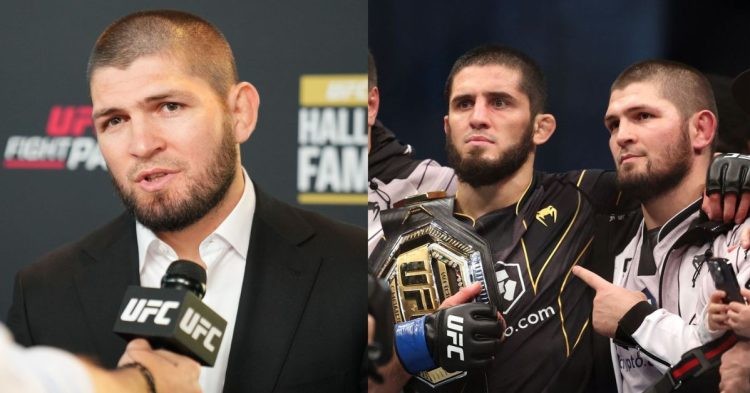 In 2020, Khabib Nurmagomedov shocked the MMA world with the news of his retirement from the Octagon. No one had expected The Eagle to retire. After all, he was in the prime of his career. The undefeated lightweight was walking away from several potential dream matches.

Now, in 2023, Khabib is once again the subject of speculation amongst MMA fans. Reports of Nurmagomedov stepping away from MMA began emerging after he shared a cryptic post on his Instagram page, referencing some sort of decision. The Russian news outlet, Tass.ru, later confirmed this. They said Khabib would no longer be a promoter for Eagle FC or coach fighters like Islam Makhachev and Belal Muhammad.

The reason cited was a desire to spend more time with his family. Khabib recently shared another cryptic post that seemed to hint at his decision. On his Instagram page, he uploaded a video of himself swimming in a chilling river in Dagestan. The post’s caption read “Life is short.” This might be the rationale Khabib is giving his followers regarding his decision to step away.

The world of MMA would certainly have benefitted from more of Khabib Nurmagomedov. However, life truly is short and after dedicating a majority of his youth to MMA, The Eagle has earned his time off. Assuredly, he will take this time to focus more on his family and his business ventures.

Khabib tied the knot with his childhood friend Patimat in 2013. The couple has 3 children, two sons, and a daughter. Not much more is known as Khabib closely guards the details of his personal life.

Khabib’s decision to step away from MMA entirely is in a similar vein to his retirement from active competition. It shook the MMA community who tuned in to watch UFC 254. He was fresh off of his third title defense, having just finished Justin Gathje with a beautiful flying triangle choke. However, certain revelations Khabib made in his post-fight interview seemed to explain his retirement.

Khabib told the world that coming out to fight without his father in his corner was one of the hardest things he’s ever done. Abdulmanap Nurmagomedov, his father, passed away due to Covid shortly before the Gaethje fight. The Dagestani grappler also revealed that he had made a promise to his mother. A promise to step away from fighting after he defended his title in Abu Dhabi. A man of his word, Khabib Nurmagomedov is yet to come out of retirement.

With his decision to step away from the sport entirely, it seems Khabib Nurmagomedov’s chapter in MMA history is over. Nevertheless, another one of his father’s proteges carries the mantle. Islam Makhachev is set to face Alexander Volkanovski at UFC 284 and this time he will not have the Eagle in his corner.  The world will soon find out how Dagestan fares in the UFC with the shadow of The Eagle looming large over them.