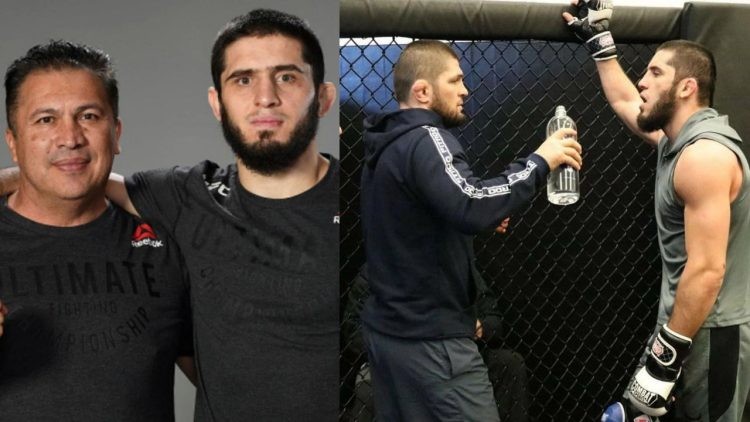 Ahead of his first-ever main event and title shot, Islam Makhachev is leaving no stone unturned. The Dagestani wrestler has been putting in the work in the gym with his mentor Khabib Nurmagomedov.

Often regarded as one of the best lightweights of all time, The Eagle surely possesses the pedigree of a top coach. As such, Coach Javier Mendez speaks about what goes down in Khabib and Islam‘s training sessions.

Speaking to Submission Radio, Mendez has his say. “In all the history, since 2012, since Khabib’s been doing sparring with me in front of my eyes, there has been nobody that’s ever taken a round from him. No one’s ever won a sparring session. Not a sparring session with Khabib ever. Except one man. Islam.”

Further, he continues, “He’s the only one that has won rounds from Khabib. Never won a session, but he’s won rounds. And I’ve never seen that.” Additionally, Mendez also agrees with Khabib‘s take on Islam. “So, obviously when Khabib talks about the next heir, he’s not saying something that he’s trying to make up and make people believe. He knows, like I know, how good his Islam is. That’s why he’s so confident in what he’s saying.”

It would seem that Khabib has his reasons for constantly praising Islam. The Eagle has taken to social media and spoken on various occasions about Islam’s potential and how he will eventually be one of the best in the division.

For the most part, Khabib and Islam’s journey up to a title shot in the UFC have been very similar. However, you can argue that The Eagle was quicker to get his strap. Moreover, you can also make an argument that Islam’s title shot against Charles Oliveira is much tougher than Khabib’s against Al Iaquinta in 2018.

With the level of opponents pretty much the same, we can say that Khabib defended his title against top-tier opposition. This is something that remains to be seen in Islam. Moreover, record-wise, Khabib is clearly ahead with his spotless 29-0 record.

With countless comparisons with his mentor, will Islam be able to live up to the hype and expectations? For starters, a dominant showing against Charles Oliveira will certainly help his case. Leave your predictions for the fight in the comments below.