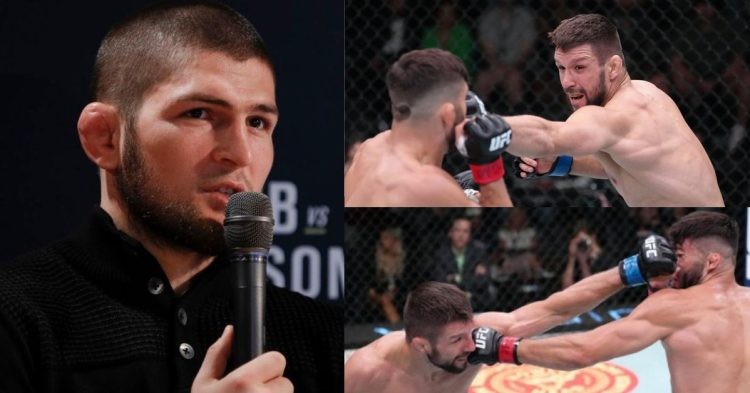 The main event fight between Arman Tsarukyan vs Mateusz Gamrot lived up to the expectations as fans around the world were hyped after seeing the two lightweights scrap in an intense war that lasted for five rounds.

Both Tsarukyan and Gamrot displayed their brilliant striking and grappling skills throughout the five rounds and had the fans on the edge of their seats. In the end, Gamrot emerged victorious via unanimous decision as all three judges scored the fight 47-48, 47-48, 47-48 in favour of him. After watching the fight, former UFC lightweight champion Khabib Nurmagomedov was among the many stars who reacted to this matchup on Twitter.

He praised UFC matchmaker Sean Shelby for booking this lightweight main event fight and also expressed his wish to watch the fight for five more rounds.

There were mixed reactions after the result as some fans and fighters believed that Arman Tsarukyan should have won the fight as he dominated the first three rounds. Meanwhile, many stars were impressed by the high level of skills shown by the two lightweights and praised them on Twitter.

Beneil Dariush, Belal Muhamad, Derek Brunson, Merab Dvalishli and Michael Chiesa were some of the big stars who reacted to this fight on social media.

Incredible fight! These guys are inspiring.

Very good fight in the main event . I didn’t know either of these guys before the fight . I know both now . Well done gentlemen . Prob a split ! #UFCVegas57

Wow! What a great fight #ufcvegas57

It is needless to say that this was a crazy fight that could have gone either way as both Arman and Gamrot dominated two rounds each. Nonetheless, these two lightweights put on a terrific show for five rounds at UFC Vegas 57. Therefore it wouldn’t be surprising if the UFC decides to book a rematch between Tsarukyan and Gamrot down the line.