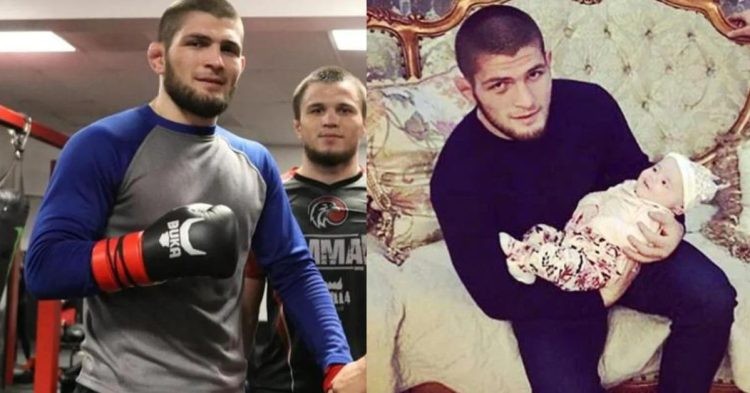 Khabib Nurmagomedov reveals the one fighter he will train after leaving MMA. (Credits: Twitter)

Recently, the rumors of Khabib Nurmagomedov walking away from MMA entirely were confirmed. The former UFC lightweight champ took to Instagram to thank his friends and family and bid them farewell.

According to reports from FullCombat, Khabib has decided to leave MMA and will now be focussing on other things. Notably, this also means that ‘The Eagle’ will no longer be coaching Islam Makhachev or be a promoter for Eagle FC.

As fans may know, Khabib walked away from competing in 2020. As such, he had since become a coach for Islam Makhachev and Usman Nurmagomedov. Despite the recent developments, Khabib will still be training his 5-year-old son in MMA.

In a ringside interview, Khabib previously revealed, “My son is already training and doing gymnastics and has a good coach that I trust. He already trains in Makhachkala. He started earlier than I did, at 3.5 years of age.” As we understand, Khabib is walking away from MMA to look after his mother, but he will also be training his son at the same time.

After the passing of his father, Abdulmanap Nurmagomedov in 2020, Khabib became incredibly close to his mother. As such, he kept her promise and stopped competing after his title defense against Justin Gaethje at UFC 254.

How many kids Khabib Nurmagomedov has with his wife Patimat?

Despite his fame and success, Khabib prefers to lead a very private life. As such, the 34-year-old Russian fighter is married to Patimat, his childhood friend. Previously, there were also rumors of a relationship between Khabib and Russian pop star Olga Buzova, which have since been proven to be false.

According to reports, Khabib and Patima have three children. The couple has been blessed with two sons and a daughter. As such, the couple first welcomed their daughter, Fatima, to the world on June 1, 2015. Two years later, the pair had their first son, Mogomed, on December 30, 2017. Then lastly, on December 22, 2019, Khabib and Patima welcomed their second son, Husayn.

As a young child aged 4, Khabib started his MMA training. But, Khabib is making sure that his son has a headstart in the game. Developing skills from a young age is very important, hence, ‘The Eagle’ will ensure that his son will go through the same training methods as he did with his father.

Whether little Mogomed will be seen wrestling with bears like his father, remains to be seen. However, there is no doubt in anyone’s mind that he will have the full attention of one of the best fighters and coaches to ever grace the sport. Will Khabib’s son reach the same level of success as him? Will he be able to solidify his father’s name even more? Only time will tell.