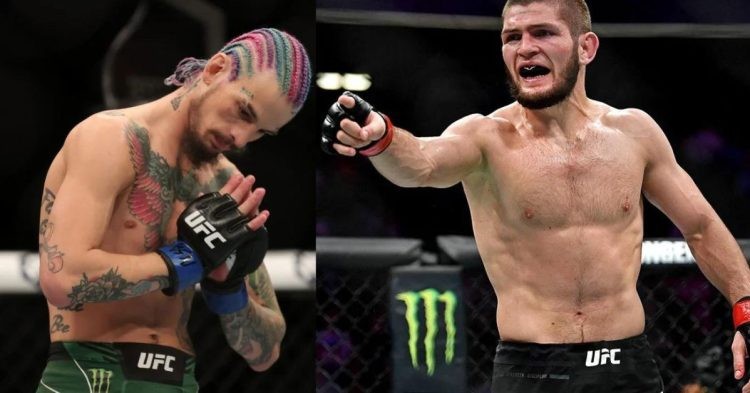 Khabib ‘The Eagle’ Nurmagomedov seems to have some praise and acknowledgment for the flamboyant ‘Sugar’ Sean O’Malley. Will Harris who did a great job of documenting O’Malley for a day, recently discussed Nurmagomedov’s high praise for ‘Sugar’ Sean.

Appearing on the JRE podcast, Harris disclosed the conversation he had with Nurmagomedov regarding O’Malley. He said, “I feel like Khabib has the best read on fights and fighters, his f**** IQ when it comes to fighters”, he said. “When he was getting inducted [into the UFC Hall Of Fame] they asked him how good was O’Malley? It was me, DC [Daniel Cormier] and Ali [Abdelaziz] backstage and Khabib was like, ‘Sean O’Malley is that guy’ and if Khabib said that then Sean, he really got it. There’s something special about him.”

Considering how many fans and fighters don’t buy into O’Malley’s hype, such high praise from a legend like Khabib will certainly boost O’Malley’s confidence ahead of the biggest fight of his career. O’Malley is scheduled to fight former bantamweight champion, Petr Yan at UFC 280 on October 22nd in Abu Dhabi.

O’Malley is certainly a rising star within the UFC with many believing he will become the next megastar. Known for his colorful appearances, laid-back personality along with his highlight reel knockout, O’Malley does seem to have it all.

Fighting Petr Yan will surely be the biggest fight of O’Malley’s career so far and could potentially be his chance for a title shot if he is successful in beating the former bantamweight champ. Fighting Petr Yan is a massive step up in competition for O’Malley.

For the most part of his career so far in the UFC, the promotion has been pushing him to be the next big star but they were doing it at a very slow pace. O’Malley was fighting guys with whom he was already a heavy favorite, although he was getting some highlight KOs that were padding up his record, he was not moving ahead in the rankings.

O’Malley’s last fight was against a solid veteran in Pedro Munhoz but at the end of the day he was no longer in his prime. Unfortunately, due to an accidental eye poke by O’Malley, that fight was ruled out as NO contest and didn’t go past the first round where both the fighters looked hesitant to engage.

Out of his eight wins in the UFC, O’Malley has secured six finishes. Four of which were in the first round. A defeat at this stage of his career may be a big setback for O’Malley but if somehow he is able to surprise the world and beat Petr Yan, he would indeed become the superstar the UFC wants him to be.