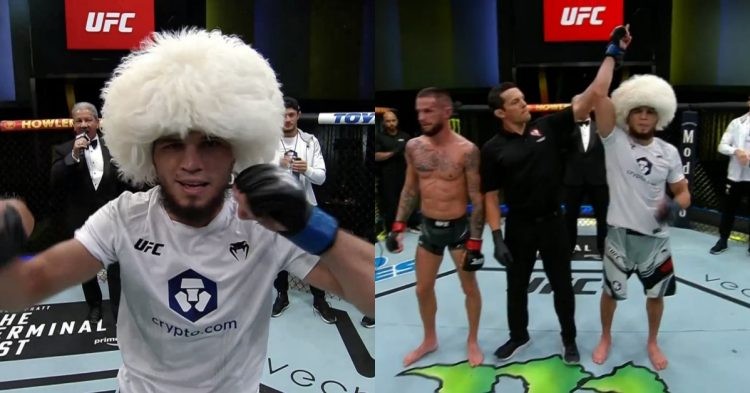 Umar Nurmagomedov gets his hand raised at UFC on ESPN 38. (Images via Twitter)

Umar Nurmagomedov vs Nathan Maness just took place at UFC on ESPN 38. Umar, who is the cousin of Khabib Nurmagomedov, is a highly-rated bantamweight prospect. After beating Sergey Morozov and Brian Kelleher, the 26-year-old was looking to get another win under his belt in hopes to find a place in the bantamweight rankings.

The Dagestani fighter is one of the best wrestlers in the division with good striking skills. He has 6 submission wins in his pro-MMA career so far and is yet to taste defeat. With Khabib Nurmagomedov in his corner, it is not surprising to see Umar dominating his opponents on the ground. However, Nathan Maness is certainly a step up in competition and a win against him will certainly be a key stepping point in his career.

Although Nathan Maness did not have an undefeated record like Umar, with only 1 loss, he had a very resume heading into the fight. Maness was on a 4-fight wins streak with finishes against Tony Gravely and Luke Sanders in his last 2 fights. Hence, he was certainly not a pushover or a tune-up fight for the up-and-coming fighter. So how did the bout go? Let’s find out.

The first minute of Round 1 was more of a feeling-out process for Umar and Nathan. However, Maness got tired of waiting around and lunged forward in order to push the pace. But Nurmagomedov immediately got a hold of a tripped Mayhem for the first takedown of the bout. With 3:29 minutes of ground control, Umar had the clear advantage heading into the second round.

Umar started round 2 with a bunch of snapping kicks to Nathan’s body. With Maness being worried about the kicks, Nurmagomedov shot for a single-leg takedown and secured it with ease. In between the rounds, Khabib asked Umar to try and pass Nate’s guard.

He did just that as Umar once again manhandled the 30-year-old on the ground. However, Nate did show some resistance as he managed to survive multiple submission attempts from the Dagestani fighter.

Headed to RD 3! How do you have it scored? 🧐 #UFCVegas57 pic.twitter.com/iMuYnsJzh2

Similar to the second round, round 3 started with hard kicks to the body. But this time around, Umar landed a couple of head kicks that snapped Nate’s head back. In the third minute of the final round, Umar got the third takedown of the contest. Unlike the last 2 rounds, Umar was not looking to take it easy. He kept easy and looked to land some vicious ground and pound.

However, Nate survived as the bout went the full distance. But the result of the bout was never in doubt. The judges had it 30-27, 30-26 and 30-25. It just goes to show the dominance that Umar showed in the contest. Following the bout, he stated that he will be inside the Top 10 in no time and he is confident about becoming the champ.

In all seriousness, the bantamweight division is INSANELY talented! So many fun fights to look forward to. There’s about 7 former world champions in the weight class alone. What other division has that??#UFCVegas57

It seems like the champion Aljamain Sterling was keeping an eye on the fight. He tweeted to let the fans about the embarrassment of riches in the bantamweight division.