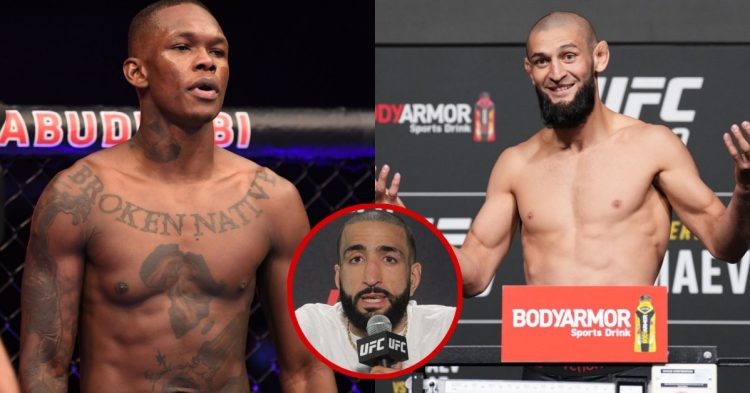 Khamzat Chimaev is coming off an excellent submission win over Kevin Holland in the co-main event of UFC 279. Following his win, the conversation immediately shifted toward what is next for him. While some think a potential fight against Colby Covington is a good idea, others are ready to put him up against Israel Adesanya, who is the middleweight champ.

On paper, a 170lbs fighter moving up in weight to take on the middleweight champion should be a very easy fight for the champ, right? However, Belal Muhammad does not think so. According to The Bully, Chimaev is not a favourable fight for Israel Adesanya. Although he possesses great takedown defence, Belal does not think Izzy can stop The Borz from taking him down.

“See now that’s interesting, cause I’d pick Khamzat in that one. Like I said, stylistically Khamzat can go out there and outwrestle Pereira and outwrestle Izzy. And then become the champion pretty easily I think.”

“Not easily, but Izzy is really good with distance, understanding distance but Khamzat, he shoots right away. He is relentless with his takedown. We’ve seen Izzy defend guys like Derek Brunson who has really good takedowns but Derek Brunson doesn’t really shoot low like Khamzat does. Khamzat shoots low, drives up high. And if I’m Izzy, bad matchup”

Khamzat Chimaev has an average of landing 3.98 takedowns per fight with an accuracy rate of 57%. On the other hand, Adesanya has a takedown defence of 78%. But in his last 4 fights, he has been taken down 11 times! If Chimaev secures one takedown against The Last Stylebender, he will not let the champ get up so easily.

The same applies to Alex Pereira as well. Poatan has a takedown defence of 73% and does not have the most well-rounded ground game. Although Alex is much bigger than Chimaev, it will be irrelevant if the fight hits the ground where Chimaev is much more superior.

As the fans know, Khamzat Chimaev missed weight by 7.5lbs for his main event scrap against Nate Diaz. It made the fans wonder what went wrong during the weight cut. Although Chimaev stated that the doctors stopped him from cutting the weight, it was not clear why they stopped him.

His head coach Andreas Michael later spoke to ESPN where he revealed the real reason. Apparently, he was having a lot of physical complications while cutting weight such as cramping and vomiting. Hence, Michael himself took the decision to not let Chimaev dihydrate any further. He also revealed that Chimaev is highly likely to fight at middleweight next.

Paulo Costa is definitely a contender to face the 28-year-old. If he does get past The Eraser, Chimaev will definitely aim for the belt.

Chimaev did not take much damage against Kevin Holland. The UFC middleweight title will be defended at UFC 281. So there remains a possibility that Chimaev may fight on the undercard of the PPV event in November and call out the winner of Israel Adesanya vs Alex Pereira.