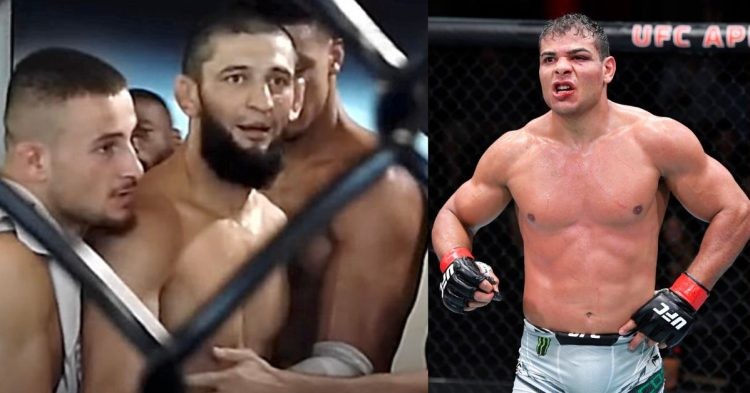 Fighters from the UFC and even from other leagues come to UFC PI to train and avail the facilitates available. Naturally, not all interactions between fighters who frequently cross paths at the PI are amorous. Since Paulo Costa was in Las Vegas he decided to visit the P.I for few training session.

The same was witnessed when Costa and Khamzat recently got into a heated argument inside the UFC Performance Institute. The altercation invloved ‘Borrachinha‘ being mocked by Chimaev for losing to Israel Adesanya as the Russian challenged the Brazilian to a fight there and then.

While “Borz” is being deterred by his entire staff, Costa, who was calm and chose not amplify himself much stated, “You want to fight me? I want to fight you.”  The altercation has gone viral in the MMA world and has taken everyone’s notice. Both these fighters are not only the top of their division but also relevant names in the sport.

In an interview, with The Schmo, he was asked about the altercation which he described in great detail. He explained that him and Costa were training at UFC PI and out of the blue, Khamzat walks over with “10 dudes with him ” and attempts to antagonise him.

Shields makes the implication that it appeared to be more of a performance for the cameras than anything else. He even mentioned that someone claimed later that “Borz” had been watching them for ten minutes.

Why did Khamzat Chimaev develop animosity against Paulo Costa

Chimaev is a fighter who looks for altercations and is seen being in one from time to time but in the current case there is history between the two because Costa recently made blunt digs at the fighter.

Costa posted a video in which he states that he does not like Chimaev. Specifically, he thinks Chimaev is not a “Real gangster”. He is under the opinion that Nate is one and will also beat him in their upcoming bout at UFC 279.

Paulo stated, “Chimaev is not a real gangster you know, Nate Diaz is a real gangster. Chimaev is just a gourmet Chechen.” Although, this is nothing new as from time to time, he makes subtle jabs at fighters in the UFC. However, Chimaev is known as someone not to mess with.